Yes, I’m still beekeeping! There has been activity outside both colonies everyday since I returned from Germany, and that is a good sign! I haven’t checked inside the colonies since I got home. I plan on taking one last peek this Sunday. After that it will be too cold to check on them again until spring.

Here are some pictures of what’s been happening with the Cosmo hive and their queen, Bee-yonce over the summer. This colony was started late in the season because the beekeeper providing these bees had an issue with the queens. We finally got a picture of Beeyonce during the August hive check 🙂

In August, I was really nervous about this colony. During my August 17th check, things didn’t seem right. The colony appeared to have gotten smaller, and there was almost no brood. You will seed in the pictures that the comb is almost completely empty, which isn’t a good thing! 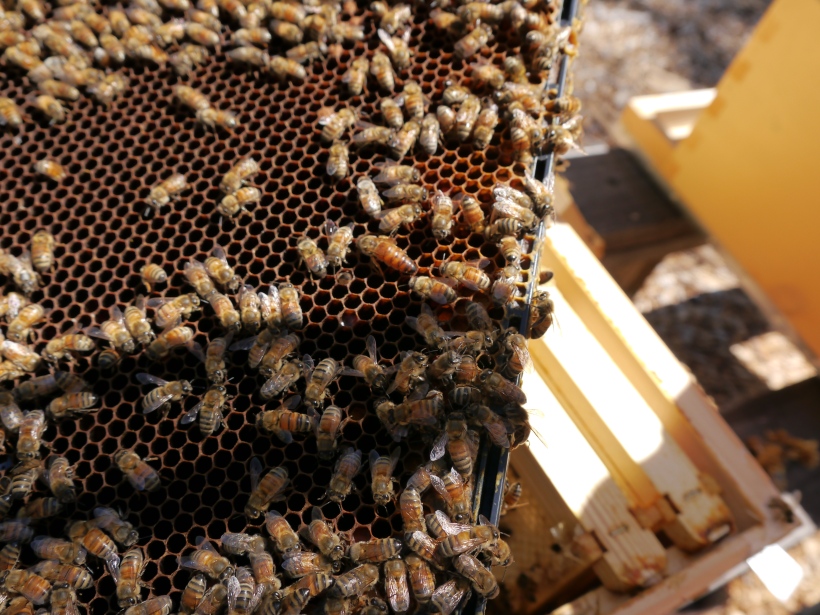 Here’s Bee-yonce, queen of Cosmo colony! She’s the longer, larger bee near the right side of the frame just above the shade line. 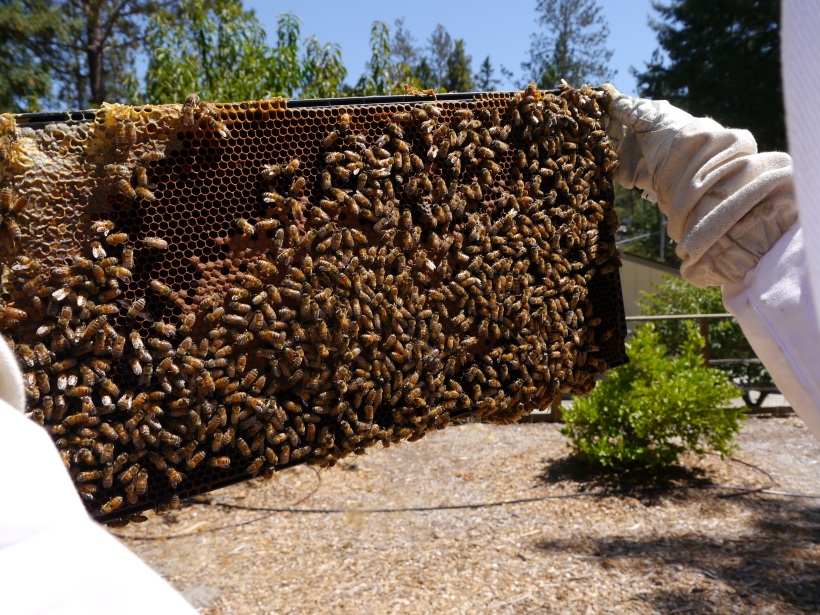 See how much empty comb is on this frame? It should be full of brood. There is a tiny bit of brood near the middle, and the upper left corner has some capped honey. 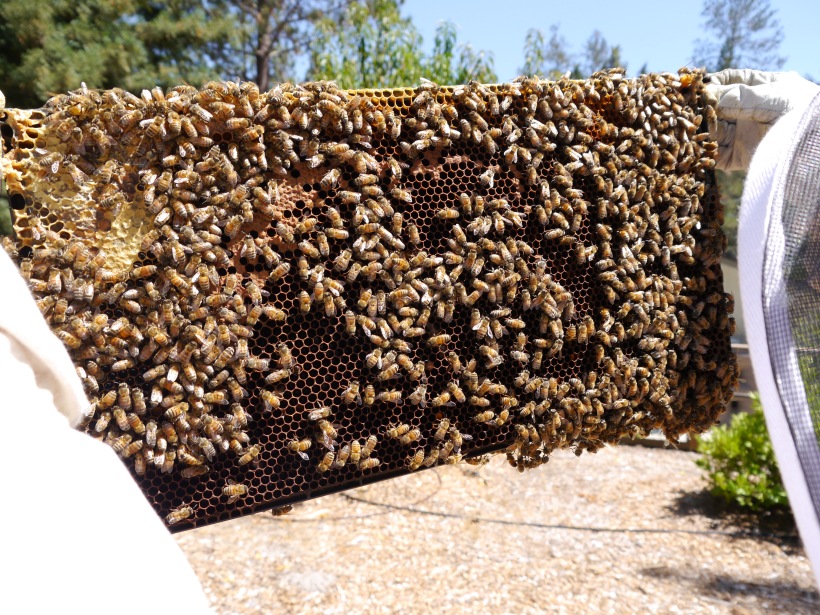 Another frame without any brood 😦

My initial “newbee” thought was that the colony might have American foul brood. Thankfully that was not the case! If it had been, I would’ve had to destroy most of the hive, including the bees.

I emailed those pictures to the bee guild members and they said it looked like the colony had “no brood.” They thought the colony could be starving. I was surprised by that suggestion but thought it could be possible since I had only be feeding them using a quart size feeder. I decided to feed them with a gallon feeder and see if that helped.

Some of the members suggested they weren’t getting enough pollen because of the drought. They informed me that pollen is needed for the colony to make brood, and suggested feeding them pollen patties. I attempted to make my own pollen patties but failed miserably so I quickly ordered some from Global Patties. 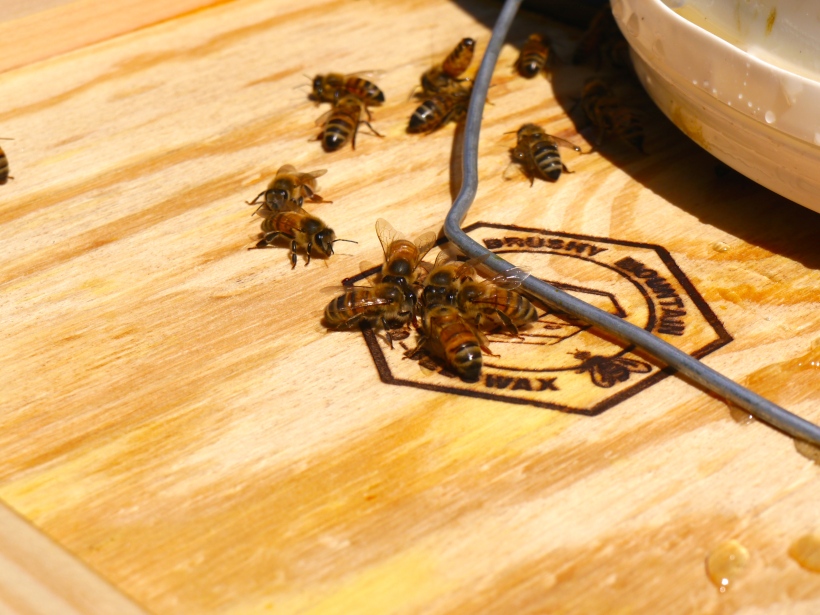 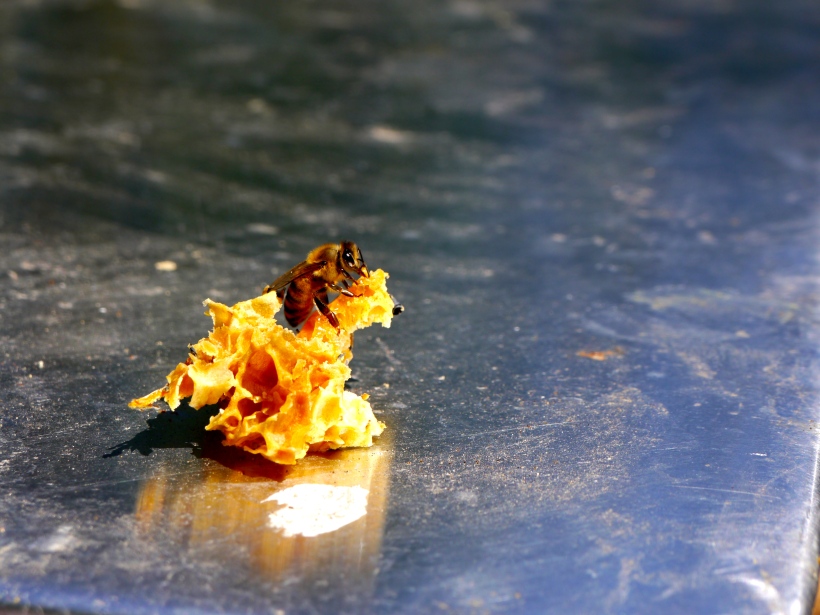 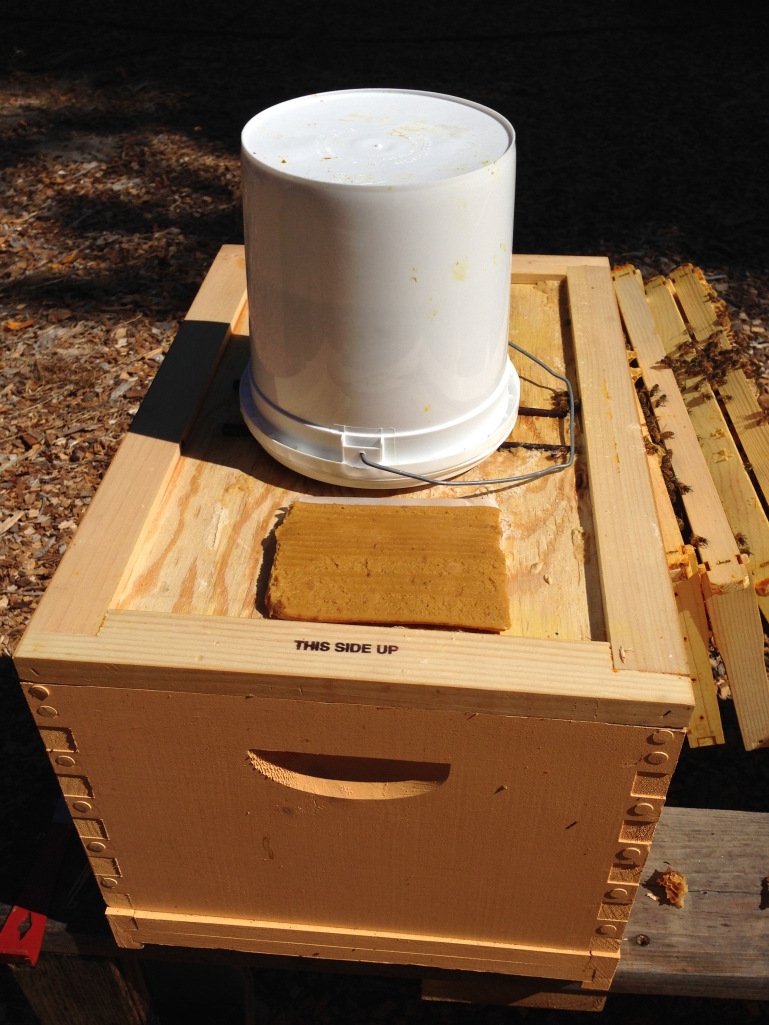 The gallon feeder, and a pollen patty. I cover these with an empty box to keep other insects and animals from stealing the sugar syrup.

A couple of weeks later on September 6th, I checked on the colony again. Their gallon feeder was empty, so apparently they may have been starving! They had not eaten much of the pollen patty.

I opened the top box and the bees were nice and quiet. Unfortunately, almost all eight frames in this box were still empty. Only one frame that I moved up from the bottom box in June had activity. Five frames were completely untouched, one had small section of comb built with honey, and another had a small section of stored pollen. Based on advice from the bee guild, I decided to remove the top box, hoping it would encourage them to fill the entire bottom box.

When I opened the bottom box they were not very quiet. This is probably because I had a difficult time removing the top box, sorry bees!

The frames in this box looked much better than they did during my August hive check. There was more capped brood, and it had a good pattern. Several middle frames had capped and un-capped honey. I added the one full frame from top box to bottom box. I decided if they filled up the bottom box to 90% in a week, I would add a medium box so they can store more honey.

Before completing the hive check I added a new gallon of sugar syrup. Here’s some pictures from the empty frames I removed from the top box. 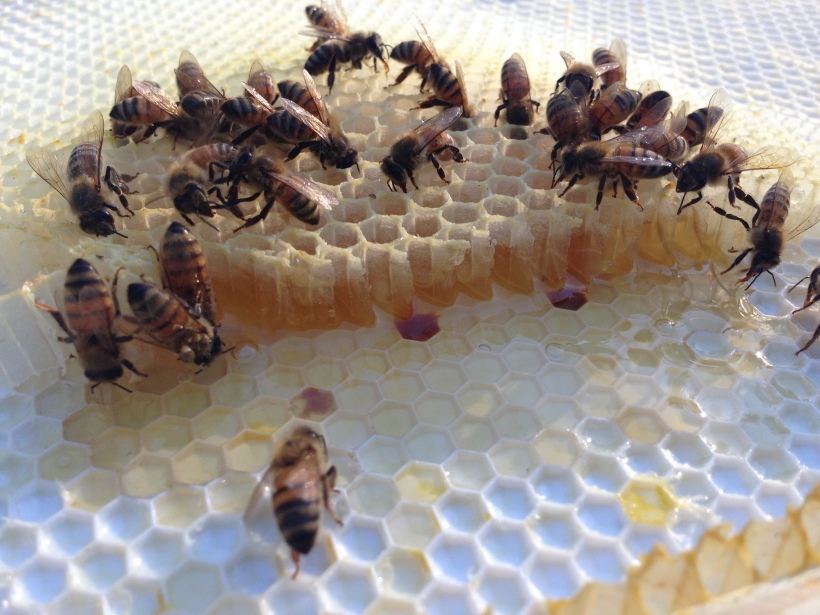 The bees eating honey from comb they built on the frame 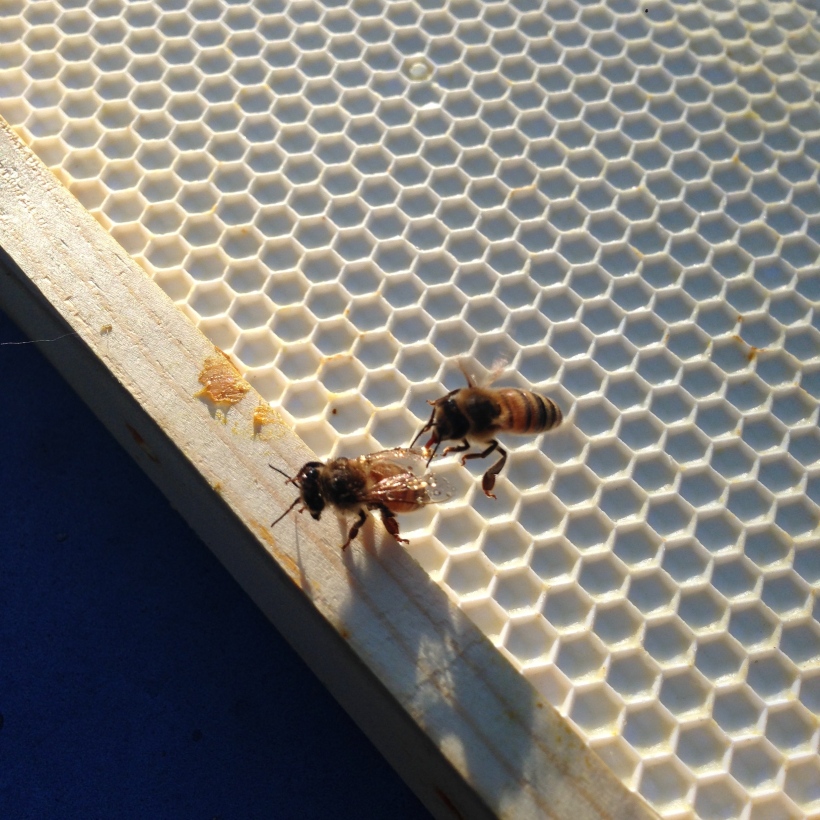 This bee got honey on its wings so another bee helped clean it off, how sweet! 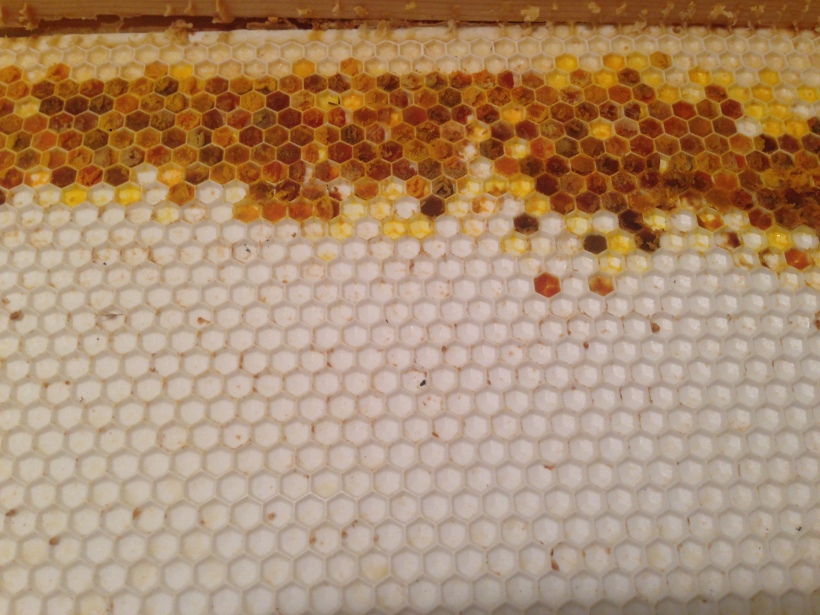 One of the frames I removed that had some pollen, I thought the different colors were interesting.

The following week, those hungry bees had eaten all the sugar syrup in the gallon feeder but still hadn’t touched the pollen patty. When I opened the box they were calm and quiet. I was surprised at how busy they’d been over the last week!

I was happy removing the top box had encouraged them to fill up this box. They got louder the more I poked around, so I didn’t check for brood. Before finishing I added a gallon of extra sweet 2 to 1 sugar syrup.

I did a mite check on September 20th and thankfully the mite count was only at nine, whew!

By September 22nd they had eaten all the syrup in the gallon feeder and had eaten about 1/3 of the pollen patty. I checked their box and it was about 90% full. I decided to add a medium box. I’m not sure if that was the right thing to do because it was autumn and colonies get smaller as they prepare for winter; however I wanted to be sure they had space to store more honey while I was away in Germany. I added a fresh gallon of 2 to 1 sugar syrup.

The Monday before leaving for Germany (9/29), they had emptied the gallon feeder again! I added two gallon feeders with 2 to 1 sugar syrup to make sure they had enough food while I was away.

I’m excited to check on them this weekend! I really hope this colony has enough honey stored to make it though the winter. Otherwise, I may need to feed them all winter which I heard can be “exciting!”

Any fellow beekeepers have winter beekeeping advice for me? I’d love to hear from you!