October 16, 2014 was my ninth day at Infusio and it was also my 15 wedding anniversary! What a way to celebrate 🙂 I’m glad we were able to spend the weekend in Paris and celebrate early!

I didn’t get any treatments yesterday because it was stem cell injection day. Today, I got lots of “goodies”, including a massage. Bodywork is part of the five steps to health at Infusio, and the treatment plan they recommended included a one massage for each week I was here.

After my treatments, I felt very tired and took a long nap. As I mentioned earlier, it was my 15th wedding anniversary, so we decided to celebrate perusing the Frankfurt’s Konstablerwache Farmer’s Market, and we went to a wonderful bakery called Konditorei Chocolaterie Jochen Optiz. I rarely eat sweets, but figured our anniversary was a good excuse to cheat!

One thing I’ve loved about Germany is they don’t allow GMO foods, so even if something isn’t organic, you still can avoid the GMO’s. Sweet things like cake, also have much less sugar than in the U.S., and you can taste something else beside sugar and/or artificial flavors.

Here’s the summary of my treatments for day nine, my total treatment time was four hours.  END_OF_DOCUMENT_TOKEN_TO_BE_REPLACED 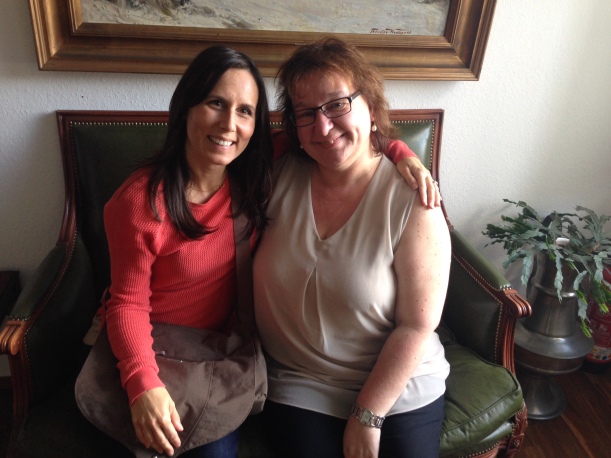 Me and Dr. Katrin Pesic after my injection.

Today I got my stem cell injection, yay!!!  The weather was beautiful and I didn’t have to leave at 6 am because I was the only patient going to the clinic.

Angela Rettig, the head of patient relations drove me to the clinic. It was fun to learn a bit more about her, Germany, and Infuiso during my drive. Angela helped Daniel and Philip open the clinic here in Frankfurt. I asked Angela more about the town of Bad Harzburg where the stem cell clinic is located.

She said it’s a saltwater spa and health resort town that hosts people recovering from surgery or other medical procedures. Angela said in Germany after having surgery, health insurance covers six weeks of rehabilitative care in clinics located in towns like Bad Harzburg. She said many people also vacation and camp in the area.

During our six-hour drive I learned a few things about Angela. She was raised by a single mom, loves Michael Buble, likes Whoppers, Latisse, and Glad Press and Seal Wrap. The last two items, Philp brings to her from the US because she can’t get them in Germany.

I shared with her I didn’t know much about Germany before arriving; and the only German words I knew before my arrival were Scheiße and Möpse. Both courtesy of a German friend who will remain nameless in this post, as to not cause embarrassment 🙂

END_OF_DOCUMENT_TOKEN_TO_BE_REPLACED

Stronger, by Mandisa; that’s the first song that played on my Songza station as I sat down to write this post. I don’t think it’s a coincidence either. It was God reminding me that with Him I am stronger than Lyme disease and Babesia!

One thing I promised myself when I started this blog is that I would “keep it real”. As much as I’d love to have anyone reading this believe my life is always fun with beekeeping, homesteading, etc., that unfortunately is not reality. A huge part of time and energy is spent trying to get Lyme disease and Babesia into permanent remission. END_OF_DOCUMENT_TOKEN_TO_BE_REPLACED