This was by far the most “exciting” day I’ve had since I started treatments. Wednesday was stem cell “field trip” day. Our pick up time was 5:45 am, and it reminded me of mystery movie.

We walked out of our apartment into the cool, moist air expecting a taxi to pick us up. Instead, there was no taxi and it was eerily quiet. A couple of minutes passed and an older man walked up to us and asked “Bad Harzburg?”

We just stood there while he repeated it a couple of times cause we were super tired and had no idea what he was saying! Finally, we said “English?” and he said “Jennifer?” and we said “Yes!” He spoke to us again in German, saying “Bad Harzburg” and “shuttle” so we decided it was probably safe to get into the van with him!

We picked up Jasmin, Infusio’s executive assistant, and the rest of the patients and were off on our 3 hour adventure north to the clinic in Bad Harzburg. The other patients already had their blood drawn last week, so they would just be getting a quick injection of their stem cells, I was the only blood draw that day.

Most of the drive was on the autobahn, which really just means “highway” and yes, it’s true there is no speed limit on some parts. My observation is that German’s drive similar to Italian’s. Our driver straddled the lanes when making lane changes, rarely used his blinker, and drove pretty fast; his average speed was 84 MPH. Several people driving even faster passed us! There were also lots of semi’s on the autobahn, which was surprising.

When we arrived at the exit for Bad Harzburg, Jasmin explained to us that the AASC Research and Therapy Center was a “traditional” clinic and would look very different from Infusio. She wanted to make sure we weren’t surprised upon arrival. She also said many famous celebrities, and public figures, including Ronald Regan, had been treated at this clinic. While that really didn’t matter to me, it was interesting to learn that tidbit of info. The current medical director, Milan C. Pesic is the founder who’s in his 80’s and still working, wow! His daughter, Dr. Katrin Pesic is the main doctor at the clinic, and has worked at John’s Hopkins University.

A plaque in the waiting area from Ronald Regan, sorry this picture is blurry!

The clinic was located on a small street, in an a former house, and looked totally fine to me. It had nice plants, comfy chairs in the waiting area, and very clean. Upon arrival, were offered coffee, tea, or juice. I was hungry and figured getting almost a pint of blood drawn on an empty stomach probably wasn’t a good idea. I quickly ate the hard-boiled eggs that I’d hadn’t eat during the drive for obvious reasons….I didn’t want anyone to react to the smell of eggs 🙂 After that I was ready for the blood draw!

The entrance to the stem cell clinic

I was very happy my husband was able to come with me, because I was really nervous. Dr. Katrin was very warm, friendly, and also spoke perfect English like all the other German’s we’ve met!. She led me back into a room with four exam beds, had me lie down, and covered me with a warm, soft blanket. She showed me all of the vials she would be collecting, it was A LOT! She explained it would take about 10-15 minutes to draw my blood, then I would need to lie there for about a half hour after, and take it easy the rest of the day.

While she was prepping everything, my husband teased me about how I didn’t like watching my blood being drawn but he didn’t mind. He was kind of excited to watch the process. I reminded him that he gets queasy when someone gets a cut, or bleeds a lot, and to stop teasing 🙂 Dr. Katrin told us we didn’t need to worry about any spewing blood or anything else because she’d drawn blood a “million” times without issue. She inserted what felt like a very large needle, and began to fill the vials. Things were going well, and she said my blood flow was so good I’d be done in less than ten minutes. 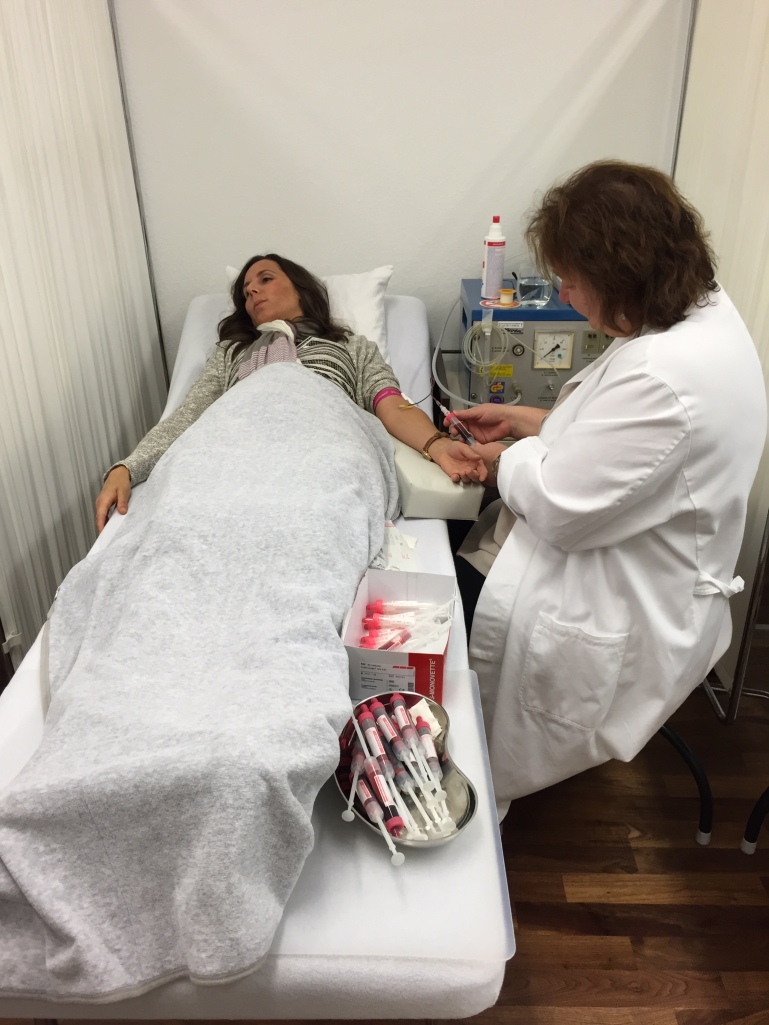 This is about half way through the blood draw. I can’t look while I get my blood drawn. See the big pan at the end of the cot with all the vials, that’s only half!

Initially, I was afraid to look because I felt a very warm liquid quickly running down my left arm. I told myself every thing was fine, to remain calm, and I focused on breathing. For some strange reason I thought “I hope it’s not on my clothes”….don’t ask me why?!? I briefly looked at my husband’s suddenly pale face, that had a look of surprise but thankfully he didn’t pass out, and didn’t look to concerned.

Katherine quickly released the tourniquet on my arm, and applied pressure to the place where the needle had been. She said something, like “these new needles are to slippery” and I realized the needle had come out in the middle of my blood draw. I figured I wasn’t going to bleed to death, so I started laughing about what just happened! 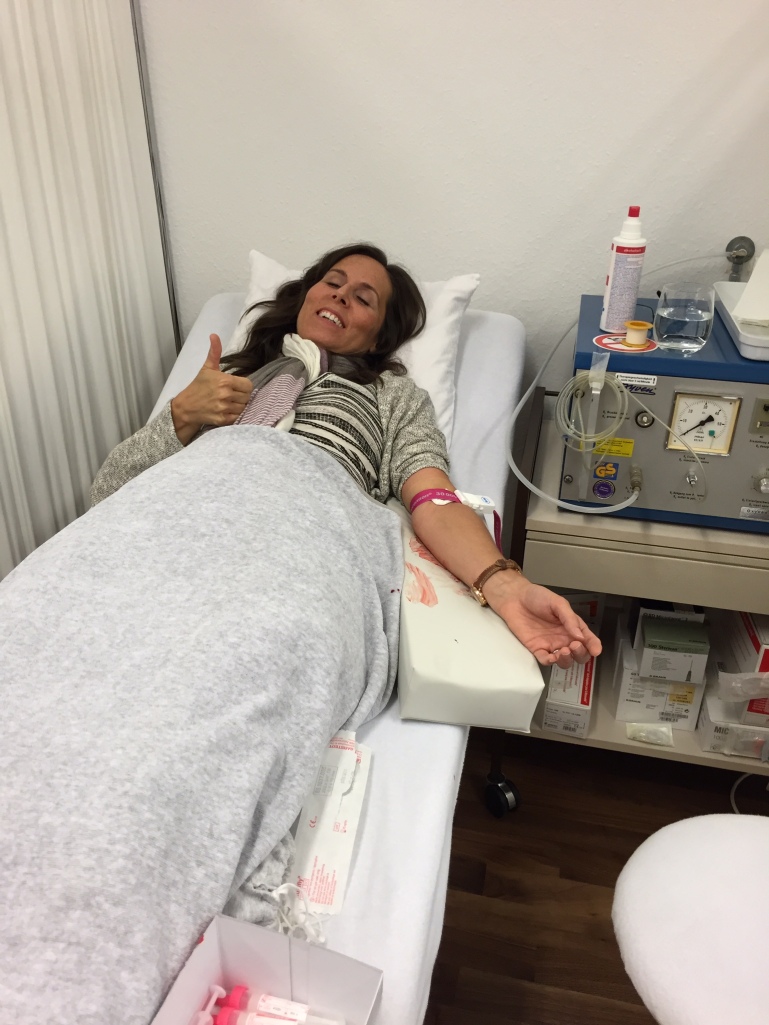 After the needle incident! She had cleaned up most of the mess already. 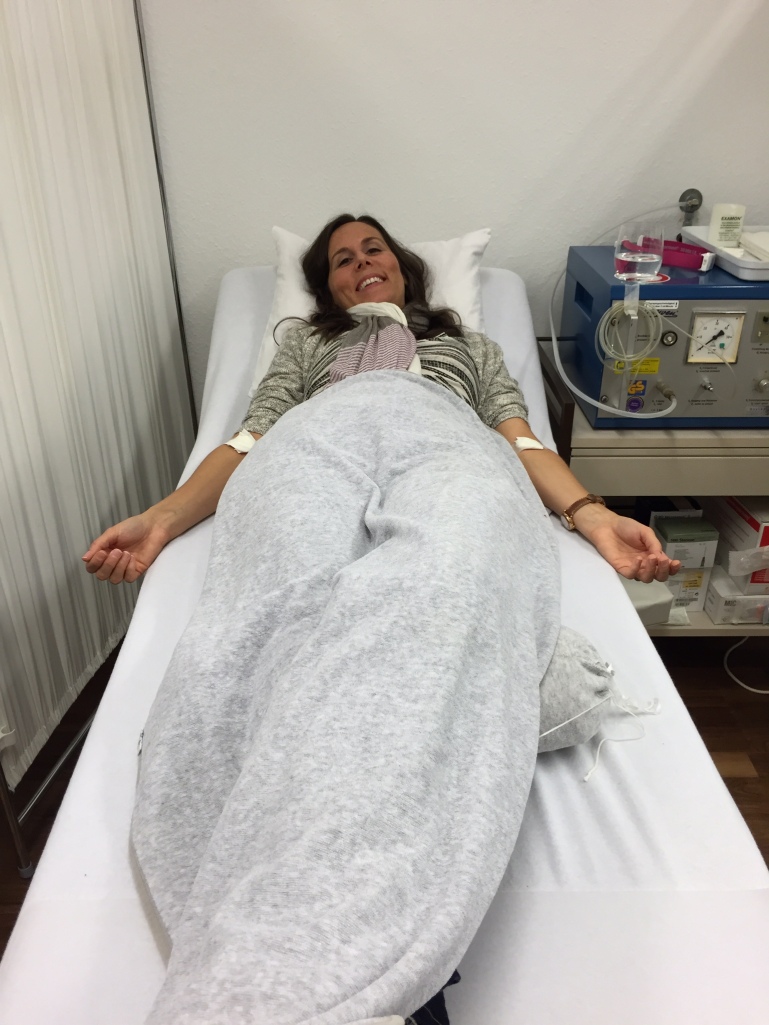 I’m happy to be done!

It was very funny to me that she said “shit” in English, rather than the German version, Scheiße. She cleaned me up quickly and apologized profusely. I guess I broke her record of perfect blood draws! There were still about five vials of blood that were needed, so she used a smaller needle and took the blood from my right arm. After that, she had me drink water and rest while she gave everyone else their stem cell shots.

While that was happening, all the vials of my blood were being rotated by a machine to keep it from coagulating. She explained that later the lab tech would mix all the vials of my blood together, then would separate my stems cells from my blood using a magnet, and place them into a separate “bag.” After that, they pick out cells with the best vitality and slowly begin adding a tiny bit of cytokines each day to encourage them to multiple. A week later, I come back and all my newly grown stem cells will be injected into my upper arm. From there, the stem cells will begin to disperse throughout my body helping to repair damage, and support my immune system. 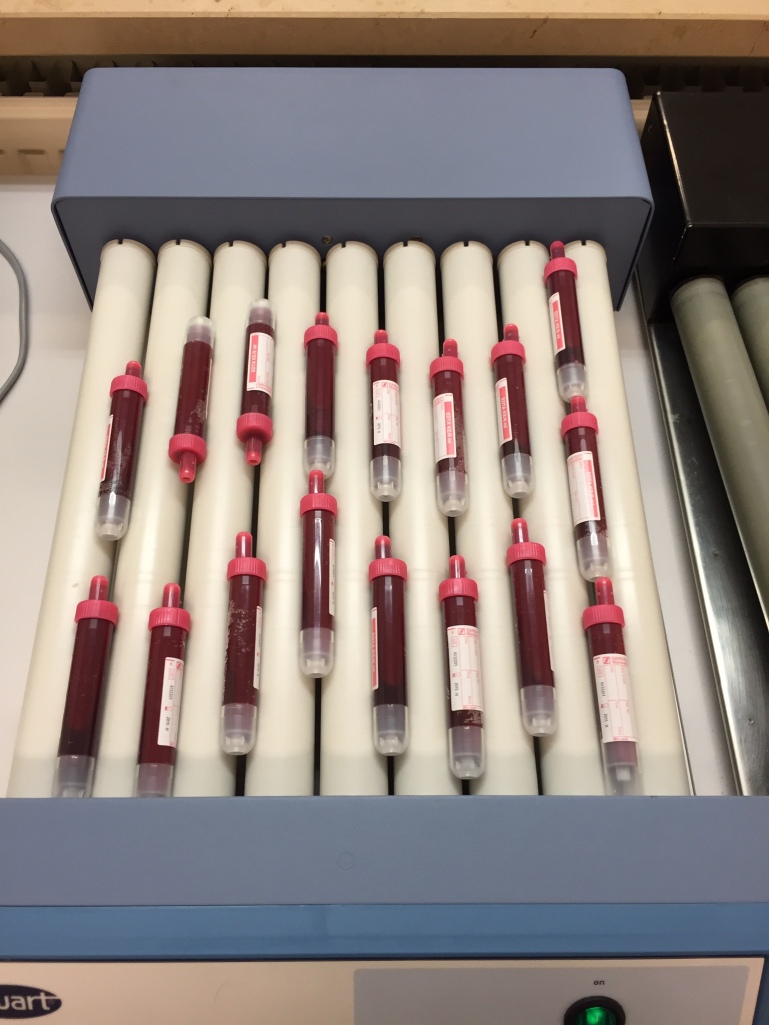 Here’s the machine rotating some of my vials.

A half hour later, we grabbed some sandwiches at a deli, and were in the shuttle van heading back to Infusio for our treatments. On our way back, we made a pit stop at the “Sanifar” which is the name for a bathroom located off the autobahn. We needed to pay .50 Euro to use the bathroom, but they had a self-cleaning toilets so I guess it was worth the fee! Here’s my ticket from the “fair.”

When we got back to Infuiso, Michael got busy hooking me up to my  IV’s and getting my infusions started. In addition to an eventful blood draw, I got these infusions today.

It was nearly six o’clock in the evening when I finished. I was super hungry and for dinner I had giant arugula salad with steak to help replenish my blood. I tried to get to bed early because I was so tired but that didn’t quite work out, more on that in my next update.

Until then, danke schoen for reading!

If you’d like to know more about my Infusio experience, please contact me. I’m happy to speak with you via phone, or connect via email.