It’s taken me 2 years to add these ladies to my little homestead and I felt this summer was a good time to take the plunge. I’m glad I waited until I was ready, because the 30 days since their arrival kept me busy and it’s be huge learning experience.

In my humble opinion, I think bees are WAY easier and I’m so glad I started with bees!

I decided to skip the cute, cuddly chick part, and instead get 16 week old, ready to lay hens. I chose this option because I don’t believe in supporting factory farms and it seemed like most hatchery’s are baby making factory farms for chicks. One hatchery I felt comfortable buying from (Sand Hill) had a minimum order of 25 chicks. Starting with 25 felt super overwhelming! Sand Hill only sells chicks straight run, meaning they do not sex them, so I may have ended up with several roosters.

Even though baby chicks would’ve been cute, I thought it would be tons of work and didn’t feel like I had the time. I also didn’t want to accidentally end up with a rooster, I’d love fertile eggs but I’m not allowed to keep a rooster because of my zoning.

I contacted Live Earth Farm, a local farm who provides my vegetable CSA, to see if they had hens available. They recommended I contact Root Down Farm located about 30 miles north. I was so glad to learn about Root Down Farm, the owner, Dede is super friendly and she’s raises heritage breed Delaware, Chantecler, and Plymouth Rock chickens. Her farm is also animal welfare approved.

The day I called, Dede said she’d have ready to lay hens available in near the end of July. This was perfect timing, so we set a date and on the evening of July 26th, I picked up six hens. The rest of this post is a picture gallery sharing what’s transpired over the last month, enjoy!

Here we are chatting with Dede (far right) and one of her farm assistants. Root Down Farm is located in the beautiful Cloverdale Valley in Pescadero, CA.

Soon after arriving, we climbed in the back of Dede’s truck and rode out to the pasture to get the chickens. It was my first time riding in the back of a pick up!

The sun was setting so most of the chickens were in the their coop, settling in for the night. Dede said the evening or early morning is the easiest time to “catch” a chicken.

Here I am, ready to go into the coop with Dede and pick out my hens. This was my first time ever holding a chicken! She told me to be sure to hold their wings when picking them up and then hold them near my body, like a football. 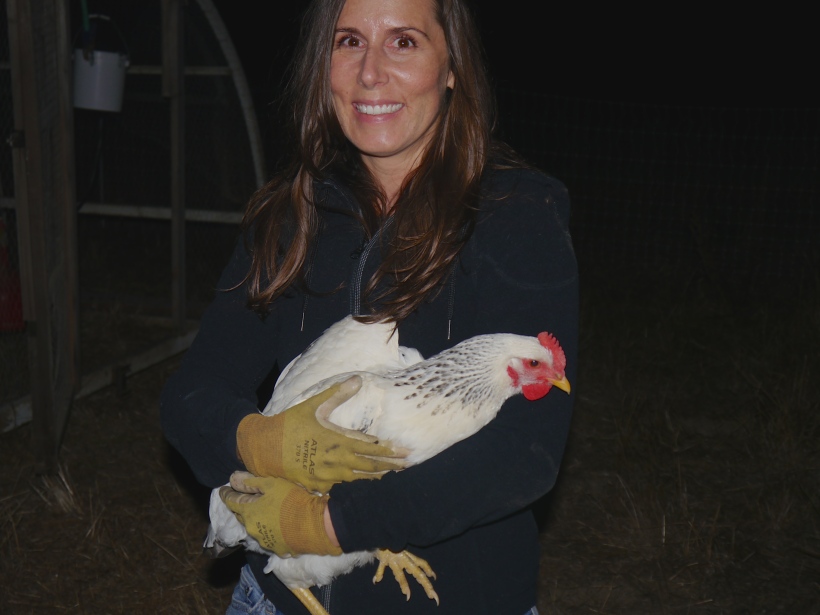 Here’s one I was able to get a hold of. Out of the six hens, I think I only picked up two, it all happened fast. Dede is a much better chicken wrangler than I am! I originally wanted three Delaware’s and three Chantecler’s but she didn’t have many Chantecler’s left so I got four Delware’s and two Chantecler’s. 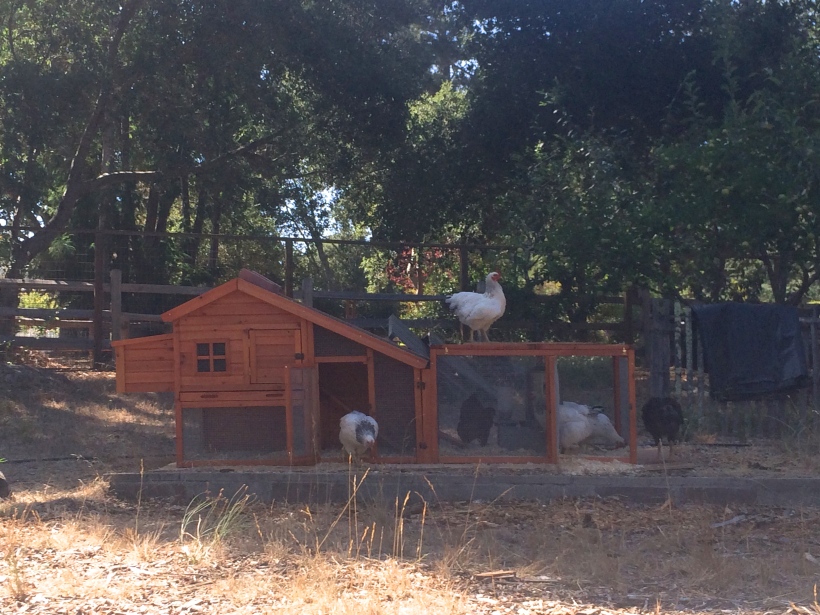 Their first day on the homestead! I spent some time in the orchard reading some of my homework so they’d get used to me. They spent quite a bit of time checking out their coop. I soon realized this coop and run was WAY too small for them so we’ve started building them a new coop and run! 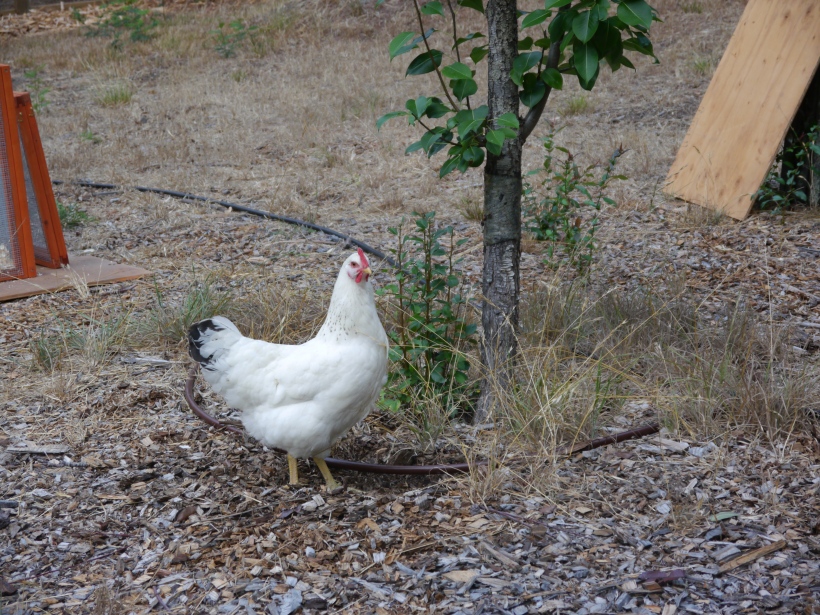 One of the Delaware’s exploring the orchard.

They loved my overgrown rosemary bush! 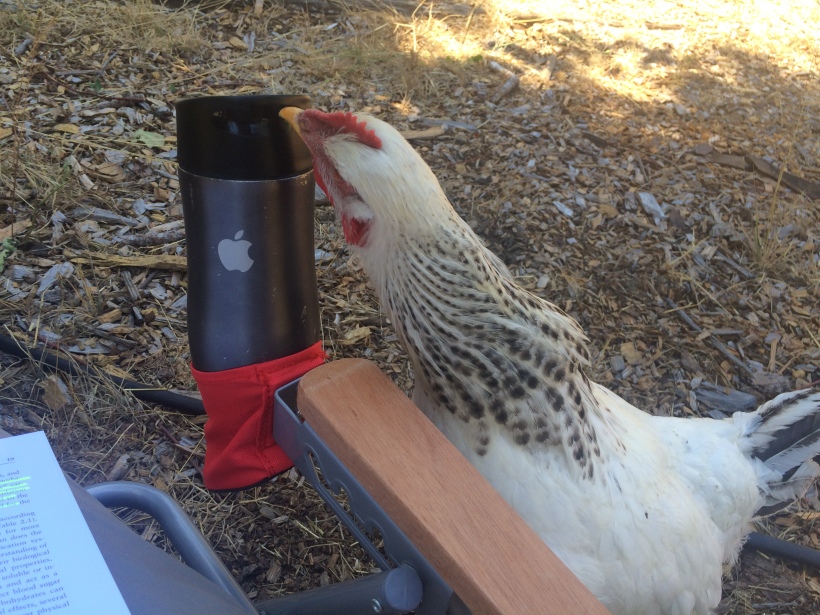 This one was very interested my cup. I wonder if she would’ve been upset to learn I was drinking chicken broth 🙂 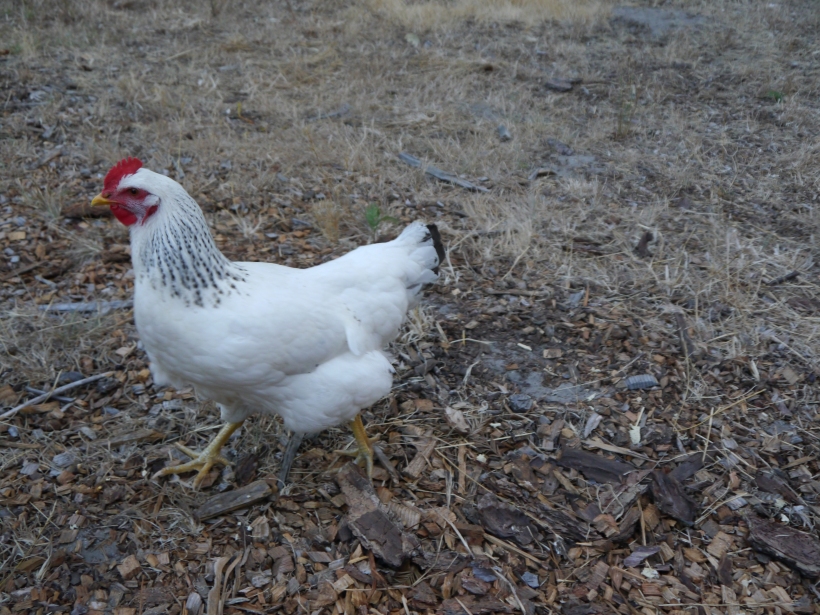 Another one of the Delaware’s, I’m still having a difficult time telling them apart since they all look so much alike. As soon as I have them figured out, I’ll post pictures with their names!

Another Delaware, this one has the most black feathers. 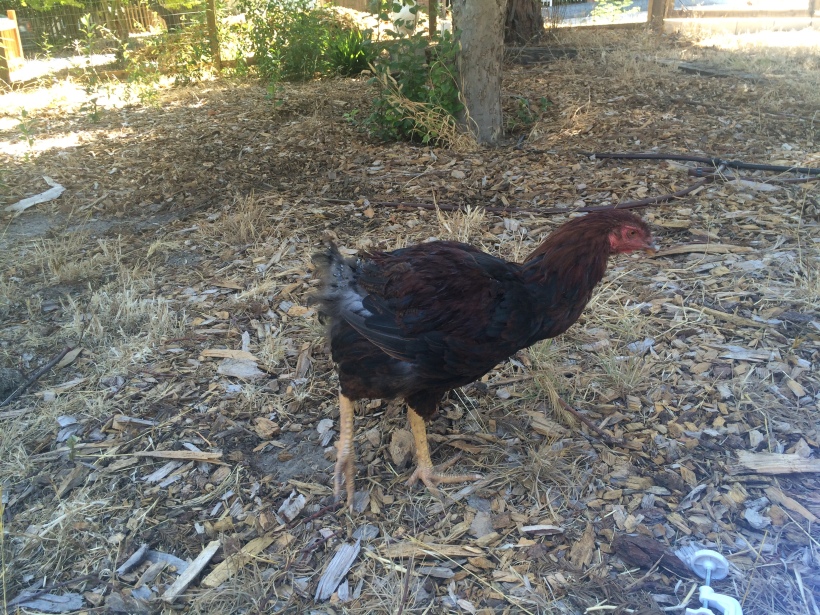 One of the Chantecler’s, this one had been hen pecked so it’s feathers were still growing in. 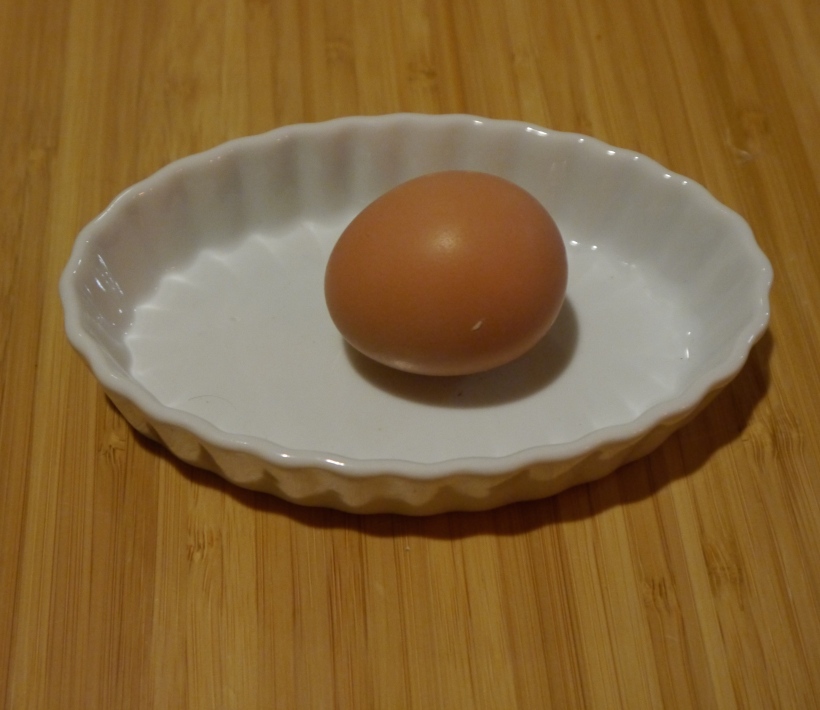 My first egg was laid on July 29th, only two days after picking them up!

Here’s the hen that laid the first egg! 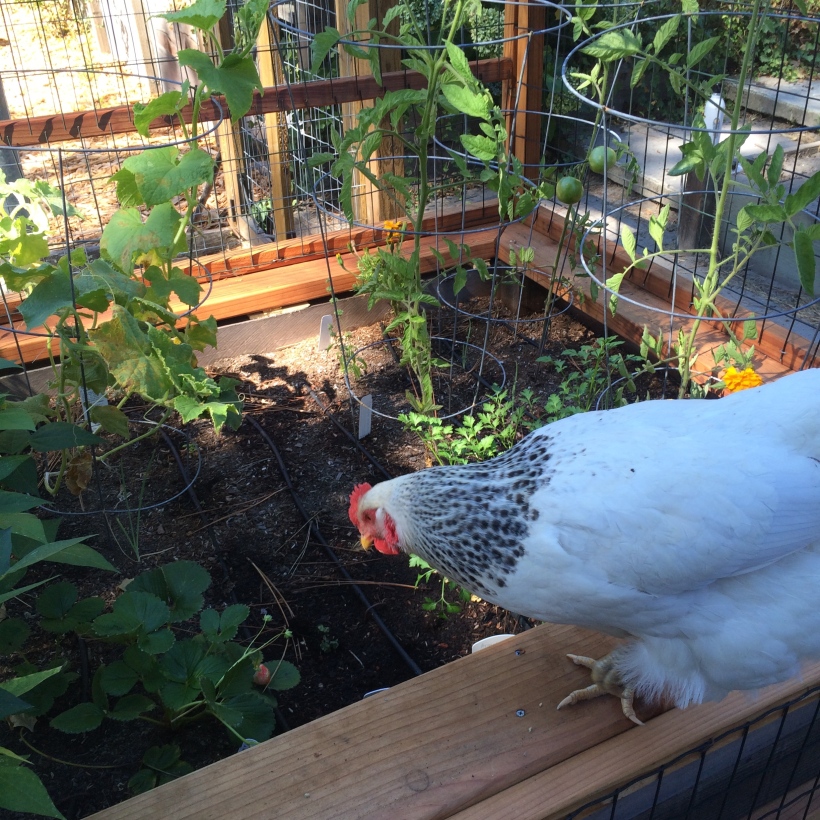 This one was so curious about my garden bed, she jumped up to check it out while I had the gate down. I think she was eyeing that almost ripe strawberry! 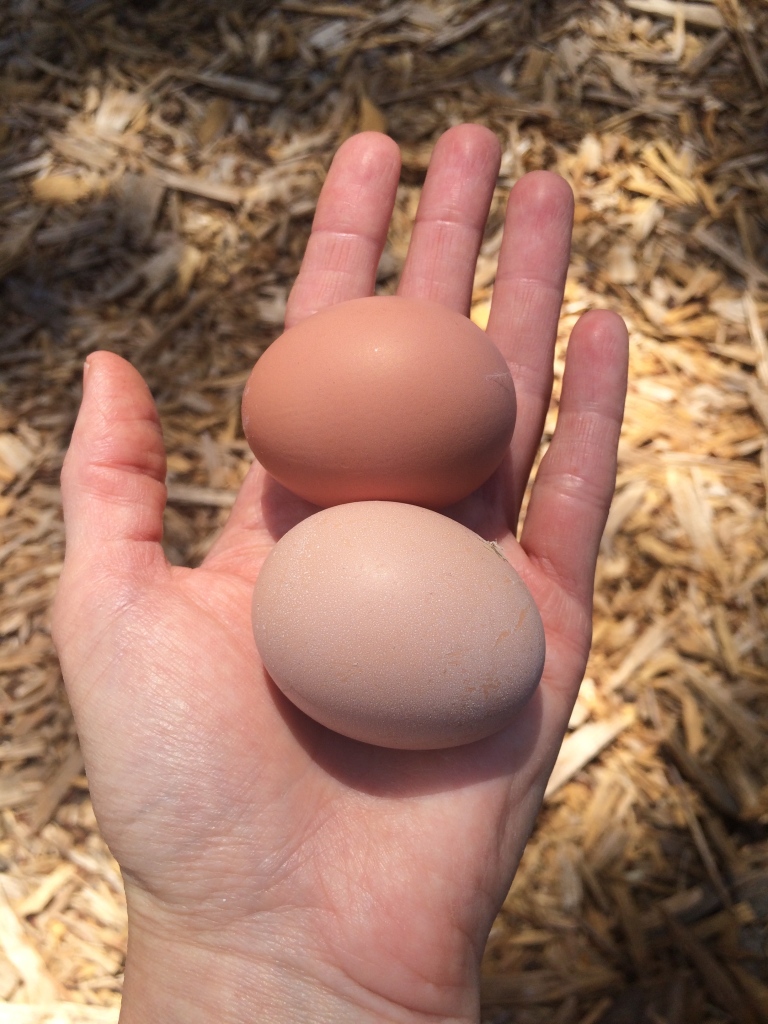 August 4th was my first two egg day. Shortly after, I got three and then four, then all of a sudden I was only getting one or two eggs for several days in a row. 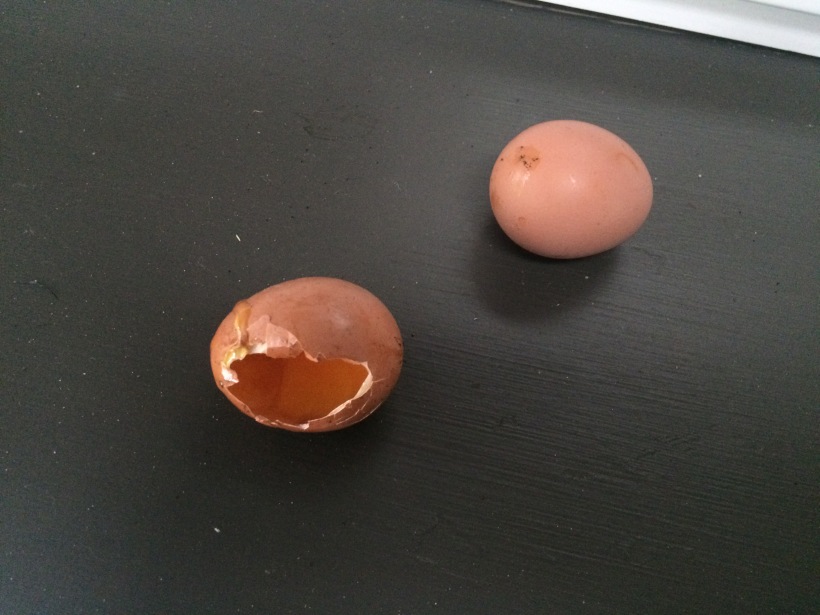 Then this happened! I walked out about an hour after letting them out of their coop, and I found a hen with an egg in her mouth! I looked down that there were two more eggs hidden in a bush. 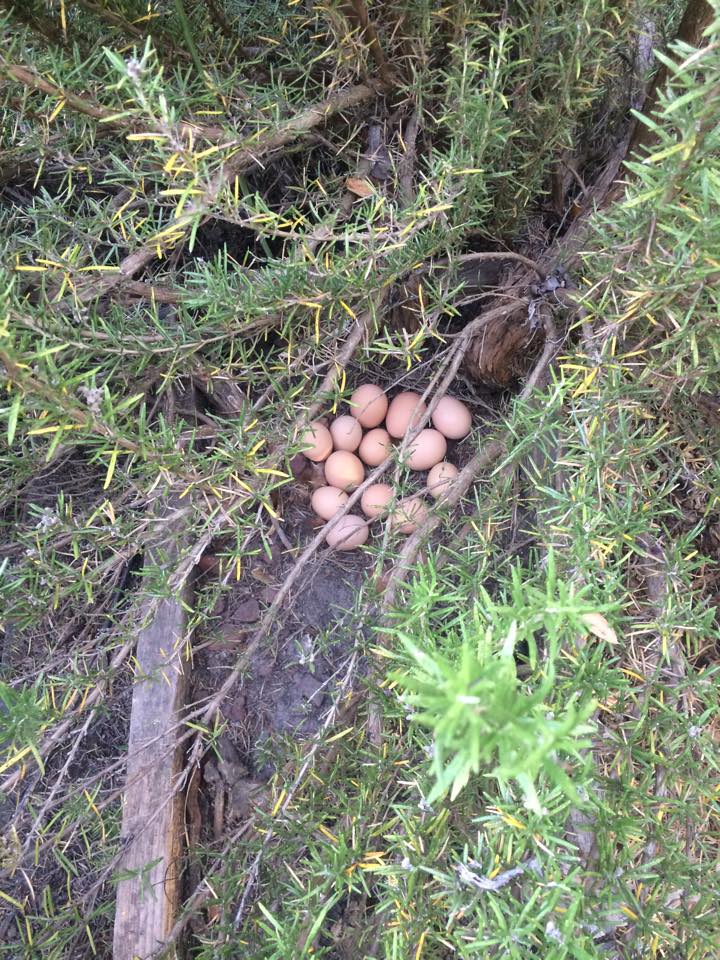 I took a walk around the orchard and found this hidden nest in the planter box of my rosemary bush. There were thirteen eggs in this pile! 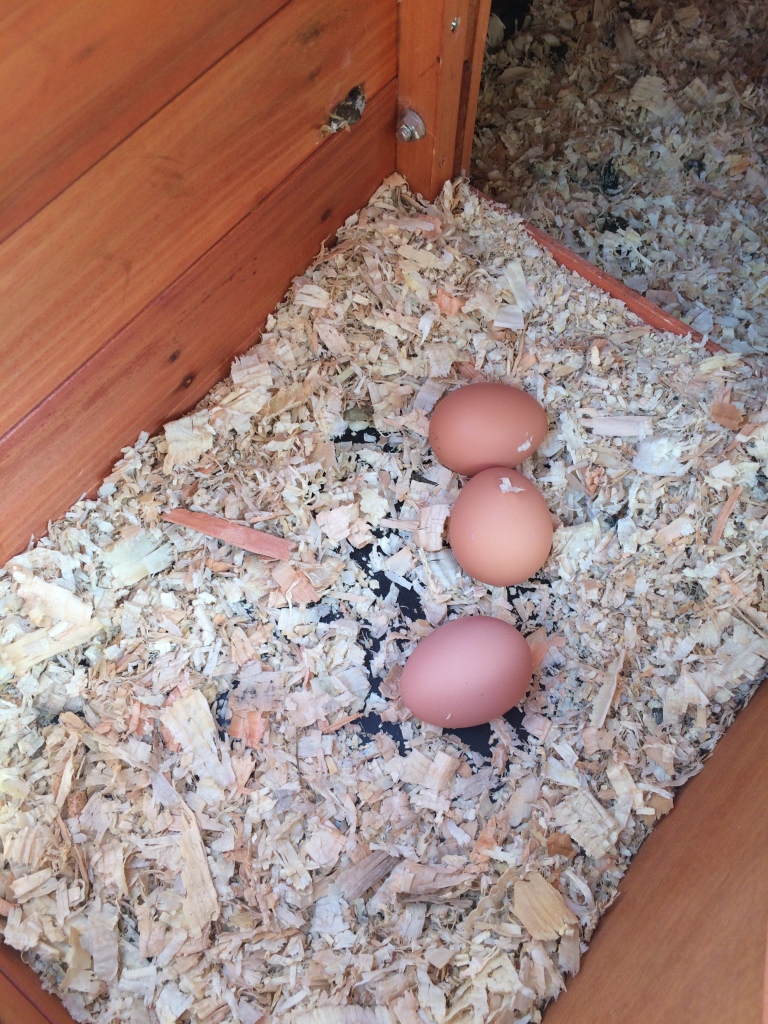 After finding all their hidden laying places, thankfully they decided to return to laying in their nest boxes! 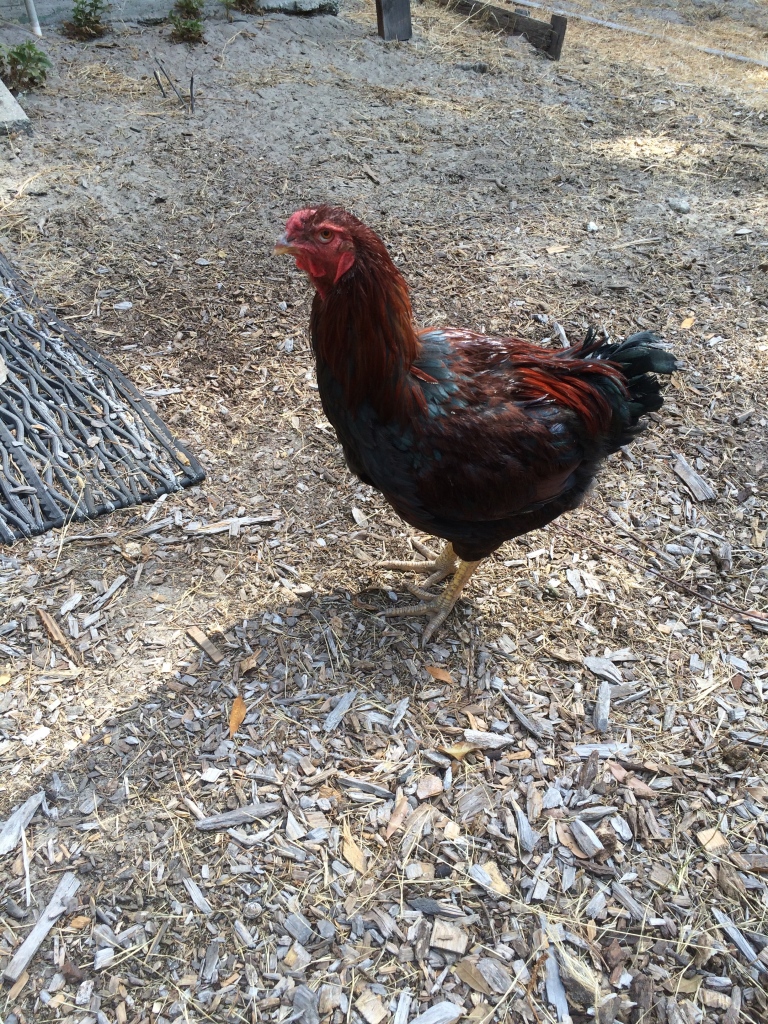 Ever since we brought them home, we thought the hen pecked Chantecler was “different.” It was much taller, had a longer neck, really long legs and huge feet! As it’s feather’s started to grow in, we became suspicious that it might be a rooster, especially since some colorful feathers were growing in. Then this happened…….

I ended up with a rooster after all! I couldn’t believe it! I love their crow! Although I wanted to keep him, I didn’t want to annoy my neighbors and have them report me to the county. I decided it would be best to exchange him for another hen. I’ll share that fun story soon!

Do you have hens? A rooster? I’d love to hear about them, share in the comments