Last Sunday I finally got the chance check my hive! This was my first time opening it since I removed the top feeder, and I really didn’t check much that time. I’ve been reading more about beekeeping, and one book recommended not disturbing the hive for more than ten minutes. Umm, that’s not much time for this newbee!

My goal for this hive check was to look for Lorde, make sure there weren’t any ants in the hive, check the brood, look for eggs, see how much comb they’d built, and feed them. Over all, things went well. My skills working with the hive are improving…I only killed two bees this time! Injuring, and killing bees is part of being a new beekeeper, at least that what the book said! I have to move much slower than I realized when removing, and replacing the hive boxes. Those boxes are already heavy, and they aren’t even full of honey!

There was lots going on in the hive, and thankfully there were no ants, or mites! I was surprised that very few bees had moved up to the top box, it was almost empty. I saw some eggs, and some capped brood. Capped brood have larvae in them, and soon new bees will hatch. There was also a little bit of honey, and possibly the start of a queen cell. I’m not really sure if that’s what it was. Next time I check the hive I’ll see if it’s still there.

Here’s pictures of the process, enjoy! 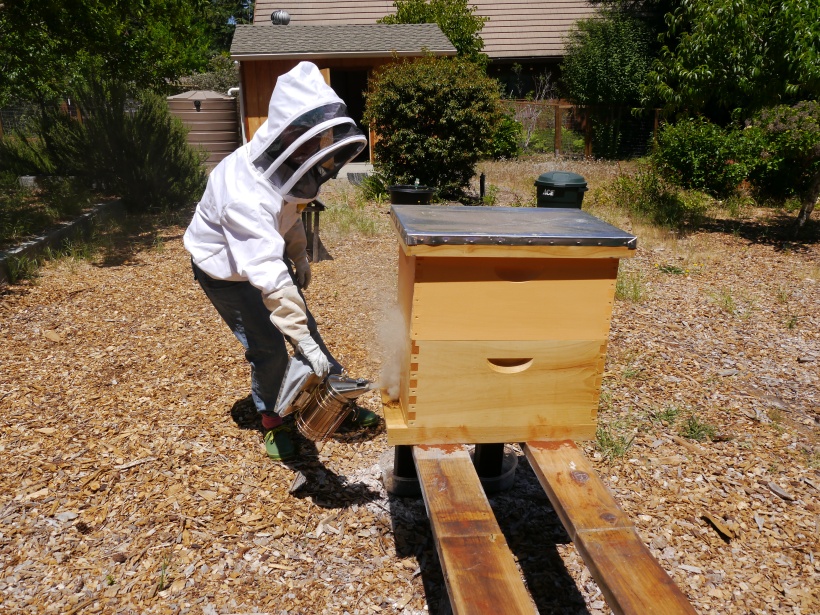 Smoking the entrance, so they know I’m there. A bit more smoke than I wanted came out! 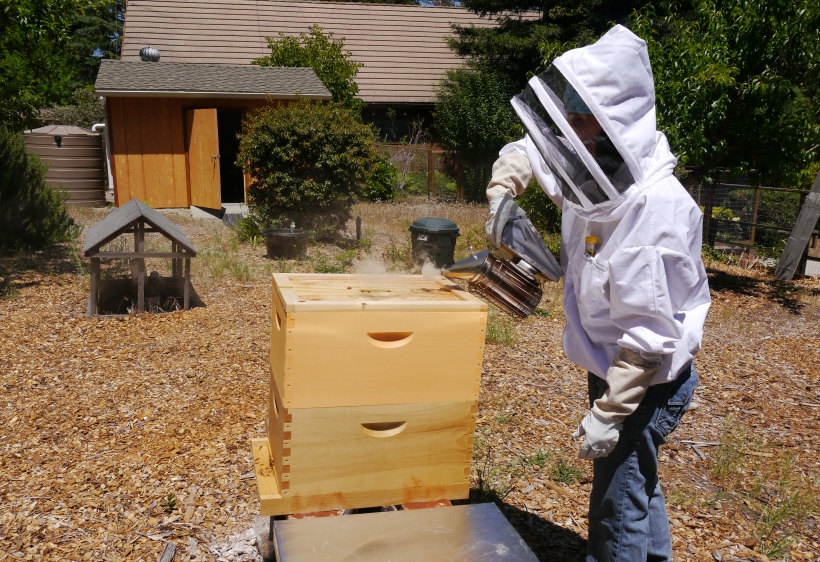 A little more smoke on the top, just to let them know I’m coming in. 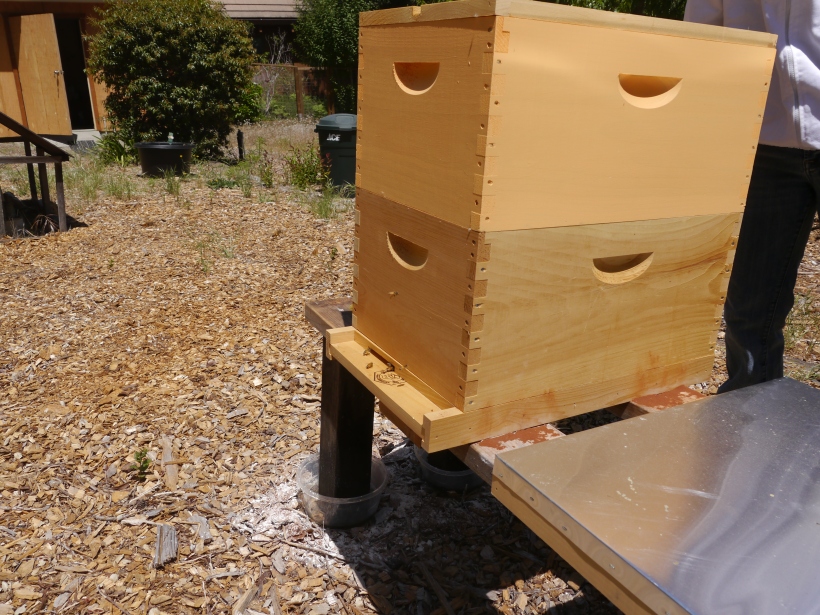 Here’s some bees at the entrance 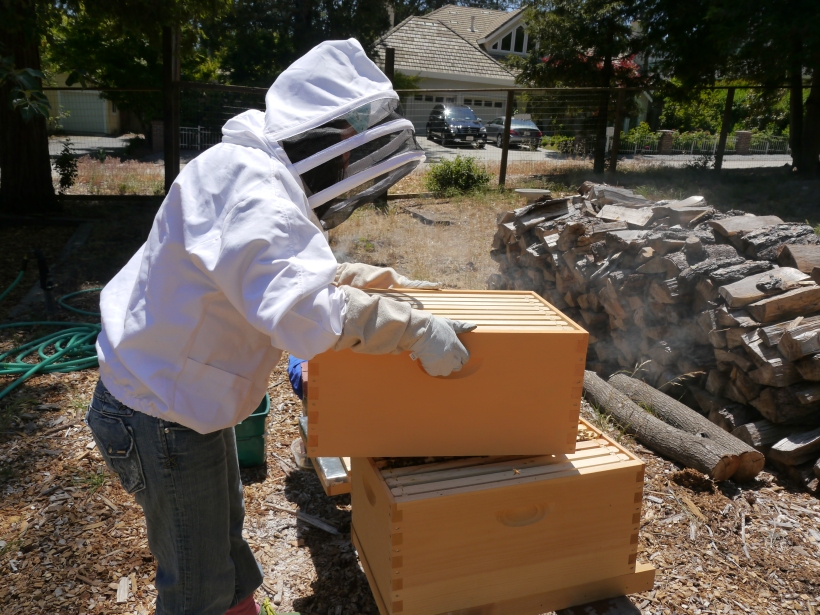 I’m removing the top box. There are usually bees on the bottom, so I have be very careful when I set it down. 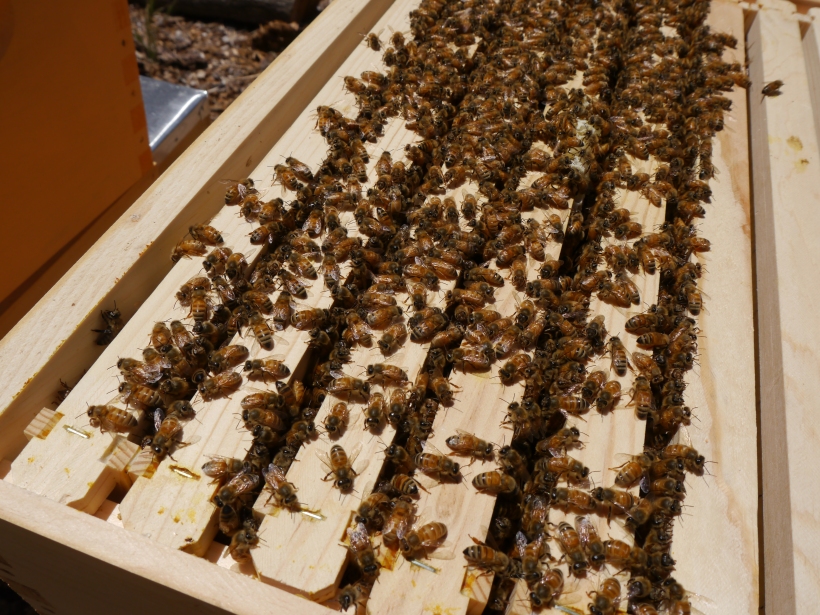 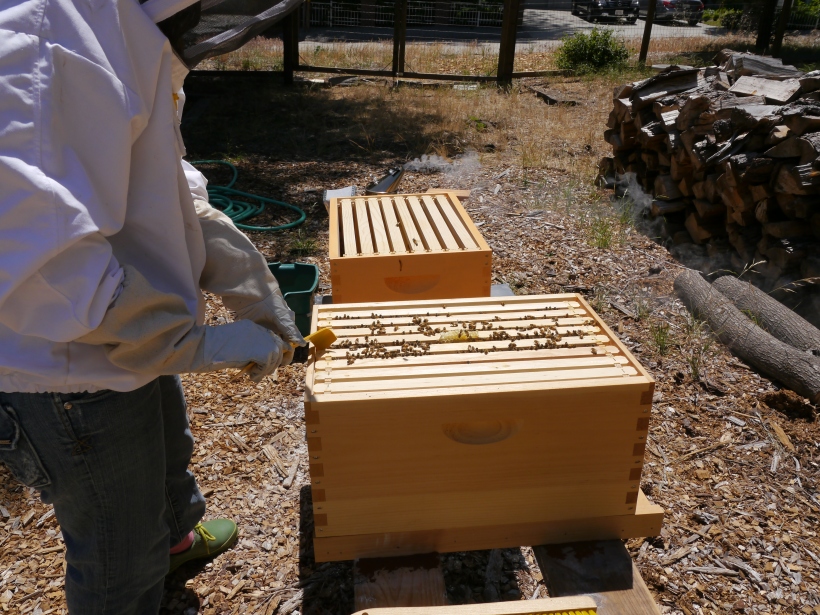 I’m using my hive tool to move the frames for easier access. There is extra comb they’ve built in the middle of the hive. 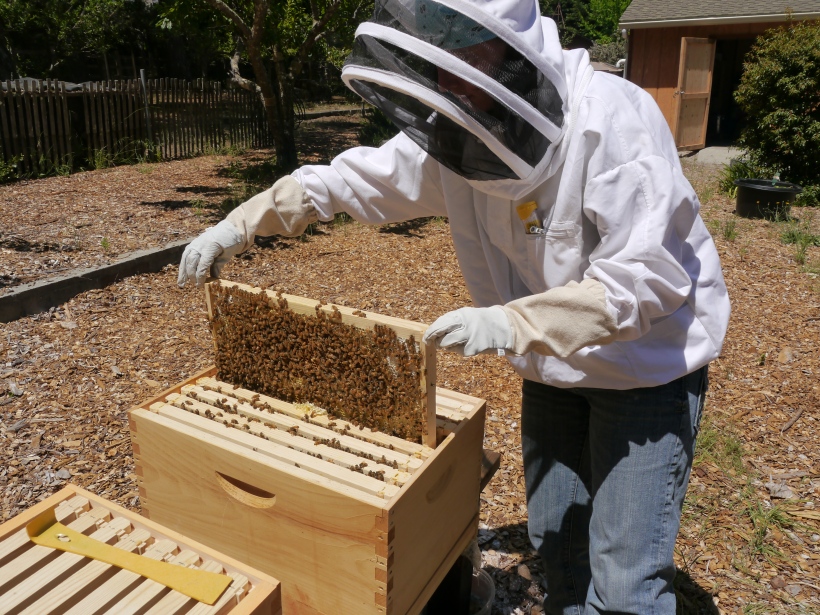 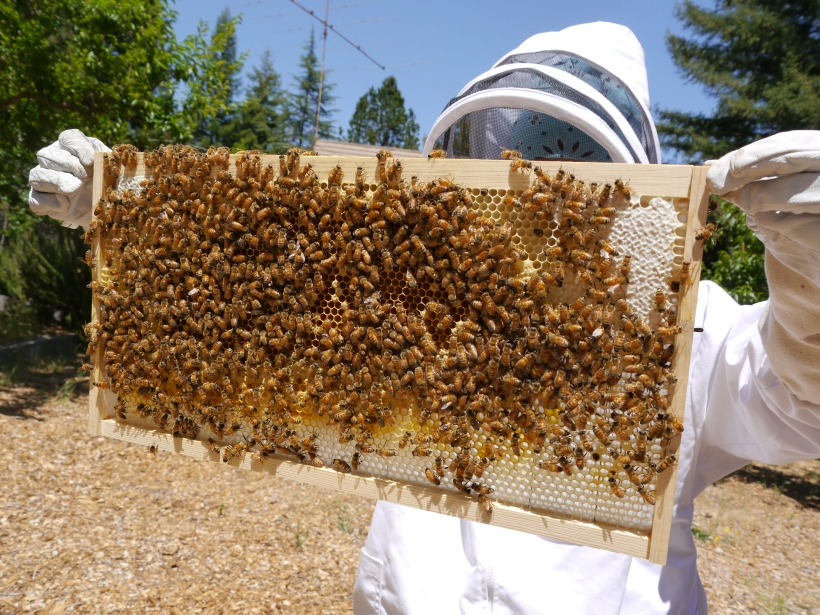 A almost full frame! The upper right corner has honey! If you enlarge the picture, there are a few larvae. They are next to the right edge of the frame, near the honey, about midway down. They look like little white worms. 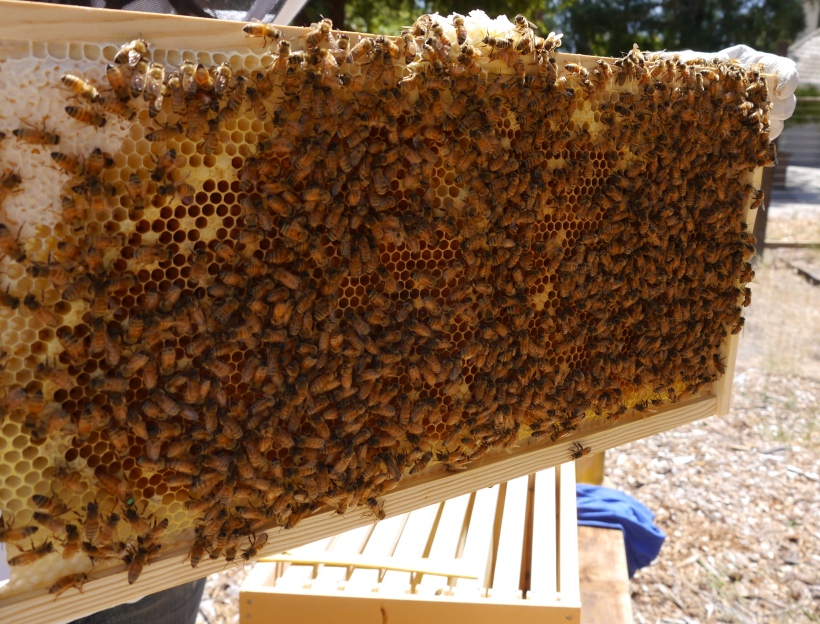 Lorde, the queen is in the lower left corner. She’s the big bee, with the green dot on head. You can also see how short her wings are compared to the other bees. This frame also has honey in left corner, and you can see some capped brood to the right of the honey. 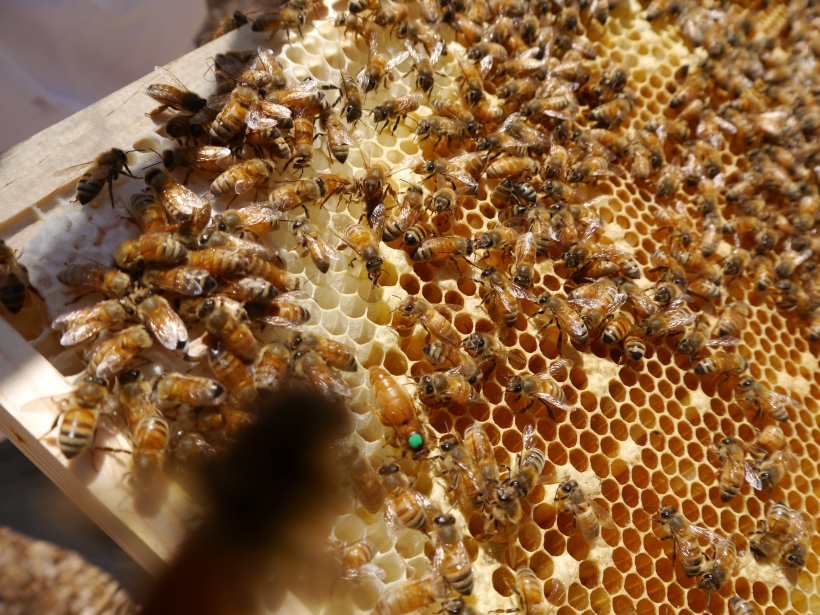 Here’s another picture of Lorde. That dark spot is a bee that flew onto the camera lens! 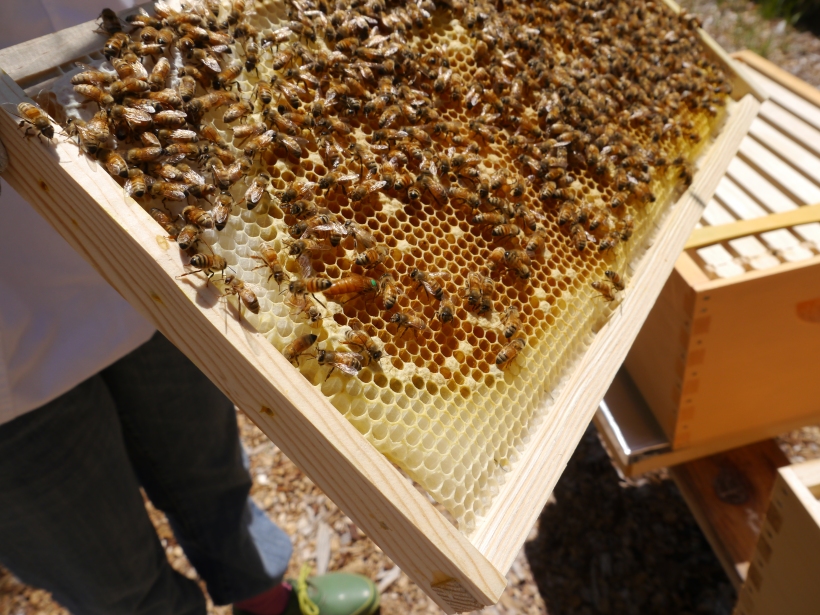 Another shot of Lorde, my camera man is good! 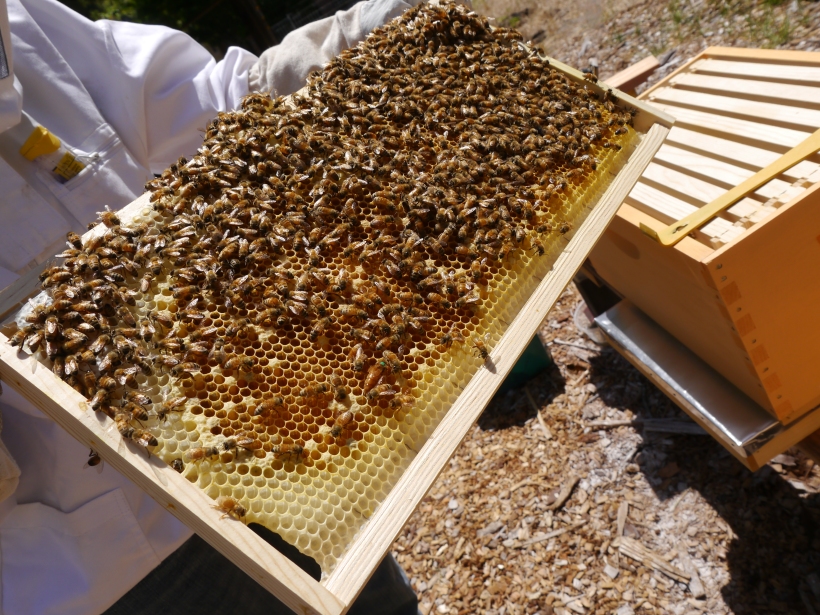 Another pretty full frame. Yep, that’s my Epi pen in my pocket! 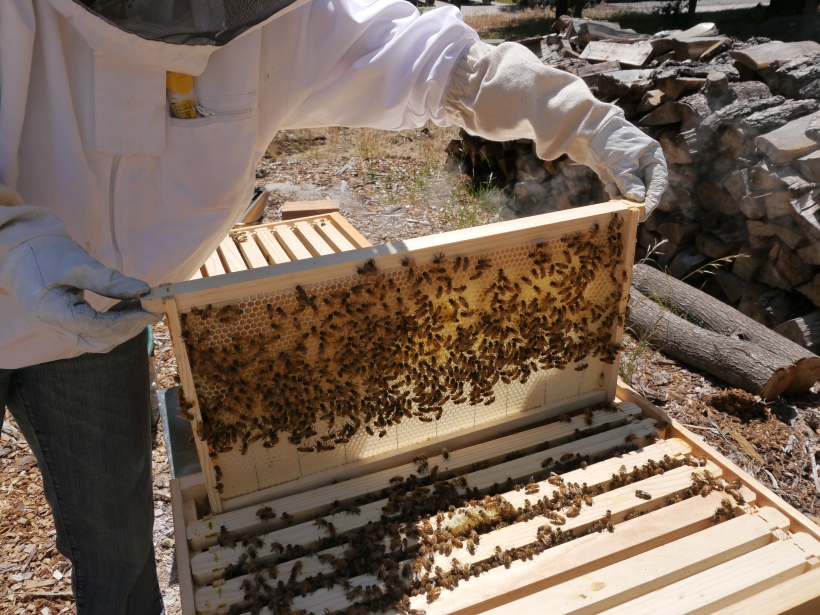 A frame near the edge, much less activity. I’m sure they’ll fill it up soon. A tiny bit of uncapped honey in the left corner. 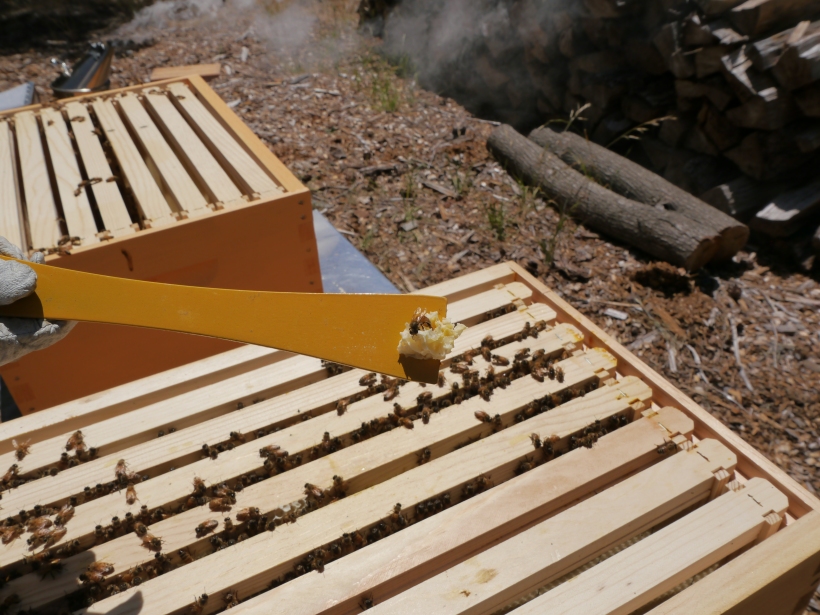 I removed the excess comb, and this bee didn’t want to leave. It’s important to remove excess comb, so it doesn’t seal the two frames together.

Replacing the top box. This is how I smashed two bees 😦 Even though I moved slow, they were underneath the front edge when I put it down.

I was very excited I got to see the queen, and all the other activity going on inside. My excitement was replaced with a bit of disappointment when I realized I’d smashed two bees. When a bee is killed, it can sometimes release an alarm pheromone. I definitely think this happened after I smashed them because the activity, and sound level of the bees increased. There were also a few bees checking on the smashed bees. I felt so bad! Based on the mood of the hive, I decided it wasn’t the best time to feed them, and I’d been out there at least fifteen minutes, so it was time to go! The next day I was able to install the entry way feeder without any issues.

My nuc should arrive anyway now, and then I’ll have two hives! So far beekeeping has been easier that I expected, and I encourage anyone interested in the beekeeping to try it!

11 thoughts on “Hive Check with Pictures of Lorde!”