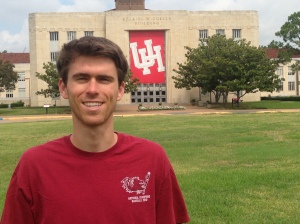 Here’s a photo of Brian, he said this about the photo “The picture is from two and a half years ago when I was near my normal of 140 pounds and only had some of the symptoms affecting me.”

What have you been diagnosed with?

– Lyme Stage 3 by Infusio in California

When were you diagnosed?

How long have you been treating Lyme and/or other infections?

How were you diagnosed?

If you had a Western Blot test, did it show positive for Lyme according to CDC standards?

Were you misdiagnosed with anything else prior to Lyme diagnosis?

No diagnoses from any Doctor or anyone in last 7 years until recent diagnoses with Lyme and SIBO. So, no.

Do you remember a tick bite and/or bulls eye rash?

No rash but had about 5 baby ticks when I was around 9 years old while on vacation in Arkansas Ozarks. Parents took me to a doctor to remove them.

How long do you think you’ve been infected?

Not sure.  I’ve had major head and joint aches from about age 12 to 21.   When I was about 21 it got worse for about two years as I lost weight (about 20 pounds from 5’10” and 140lbs to 120lbs) and had no energy, then somehow I became well enough to finish school as I stated earlier.

What treatments have you tried? If possible, please list what medications, herbs, and/or supplements you’ve taken.

Nothing specific to Lyme

Do you feel any of your current and/or prior treatments helped?

Intermittent fasting with lots of sun bathing and calories (especially from cheese, egg yolks, and milk and cereals) put some weight back on me and gave me energy for about a year but left me with the head and joint aches. I could basically tell I was just delaying the worsening of my condition.

Please rate your overall well being at this time, using a percentage. For example, 100% would be in perfect health, and symptom free.

50-60%, but hard to really judge because I might say 20-30% if I was forcing myself to eat anywhere near the amount of calories I need (which I’ve done very often over the past 2 years in which I’ve gone from being 140 lbs again down to about 110 lbs now). Key thing I’ve learned is forcing the calories in made things worse symptom-wise and led to being unable to eat due to pain and loss of weight anyways; therefore I try not to force food in me.

Please list your top five to ten symptoms, in order of severity. Give a rating of pain and/or severity, if possible. (1=mild to 10=severe)

Generally after eating or fasting the pain starts.  The pain can start from any of about 9 points out of the following: left temple, back of left head, back of left neck, top of left shoulder blade, under left shoulder blade, two other spots along left spine, under left lower rib of my front side, and outer left hip. But, usually it will start in one of two locations with the main one being under the lower left rib near stomach (around the spleen’s location) and the next major starting point being under the left shoulder blade. Then, the pain will radiate to most of the other spots although it might not hit them all and it might not go in any particular order.

Pain also radiates down left leg and arm if I eat too much or eat non-paleo type foods (grains, legumes, dairy, eggs, nightshades). My arm and leg will often fall asleep/go numb on their own accord at these times and the arm and leg will be in major pain upon regaining feeling (as will the nine spots along my main nerve pain axis).

At times this pain results in a pulsing at the top of my head for about thirty minutes and I end up unable to stay awake.

Low Energy- worse if I eat too much although eating less obviously means less calories so even though I feel more energetic on less food I know I can’t overdue it.  Either way I have to sleep about 10-12 hours to keep nerve pain down. I might walk a total of 15 minutes a day. Often I’ll be unable to stay awake if the meal I’ve recently eaten is more than 500 calories or if I’ve eaten more than one meal already in the day.

Usually have a bowel movement every 3 to 5 days even when eating upwards of 2500-3000 calories a day (which I was doing a year or so ago). As you might expect the constipation affected me much more when I was eating more as that meant major bloating and more resulting pain.

Yet again, when I was actually eating more calories this might be rated more of a 7-9 as I just can’t handle digestion for some reason.

These could easily be 7-8 if I were eating any grains, dairy, legumes, nightshades, eggs, nuts, or many carbs (basically I have to be low-carb paleo diet these days).

Also have a drop in blood pressure upon standing from a laying down position and feel much worse standing than sitting and sitting than laying down.

Why did you choose to get treatment at Infusio?

I have a friend who has had a near 100% recover from lyme stage 4 there (he was treated just over a year ago and got better within months). He kept pushing me to go to Dr. Battiade even before I had any clue about what Lyme really was. It helped to talk to many of those he knew that got better from lyme at Germany Infusio.  Also, it has helped to talk to some people from your blog as well as others who have spent tons of time and money trying treatments here in America without very satisfactory results.

What is your Infusio treatment goal?

To recover the ability to digest without major pain which will hopefully help with all other symptoms.

Long term goal is to use my dietetics degree and possibly look into functional medicine and help others who are going through similar symptoms/pains to what I and many others have gone through.

Also, I plan on continuing to try protocols and diet afterwards with the hope that they will actually be effective with a healthier immune and digestive system (which the stem cells will hopefully boost).

I am curious to know if there are others who have similar nerve pain as I described above.

I’m extremely grateful for the detailed information Brian shared, it amazing to read how much he’s done via his diet to support healing. I can’t wait to hear how he’s doing after treatment at Infusio. Brian is finishing up his treatment in Germany this week, so if you’d like to share encouragement, please do so in the comments. I am sure he’d appreciate it!