CRAZINESS! That’s a good word to describe my bee colonies this September!  It’s been very unpredictable, and they are keeping me on my toes!

As you know, California is experiencing the worst drought in over a century. It is dry, VERY DRY out here. It has been for the past three years. This is the hottest summer I remember since I moving here in 1996, we’ve had several over 100 degree days. The drought means nectar flow season is completely messed up.

Fruit trees bloomed 2-3 months early, and although we typically don’t get rain from May – October, we are normally able to water ornamental plants that provide nectar and pollen for honeybees and other pollinators. This year, many people stopped planting or watering their ornamental plants; that caused the flow of nectar to be less than usual and it also stopped earlier in the season, at least two months early. When nectar flow ceases it’s known as dearth, and although dearth happens every year, the drought conditions have made nectar extremely scarce this year and for the past few years.

Last year, my colonies didn’t experience any robbing. My husband made robbing screens to help protect their entrances from yellow jackets and bees from other colonies who might try to steal their honey.

This year is a completely different story!  I was going to do one last hive check of the season on September 20th, a 99 degree day! Not a fun time to be in a bee jacket and hood 🙂

When I approached Zinna colony I  noticed some weird behavior outside one of the boxes. I quickly realized that other bees were trying to get in and rob the sugar syrup in their feeder and honey inside the colony. Thank goodness I caught it early, otherwise the robbing bees may have overtaken this colony. Here’s pictures of what the early signs of robbing look like: 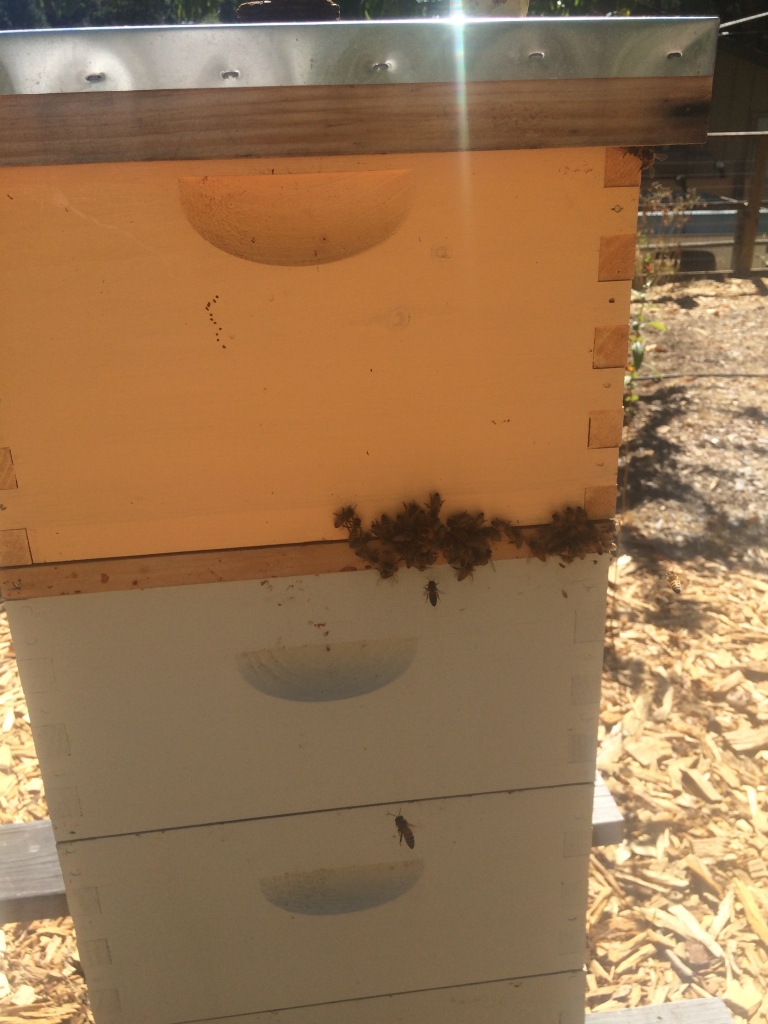 This is the back side of the boxes and it was a telltale sign these bees didn’t belong to this colony. There is no entrance here but these robbing bees are trying their hardest to find a way in at the seam. The orange box is keeping the feeder from being exposed.

Here’s a picture of the top front entrance of the colony. I put a small piece of wood in that entrance to keep the robbing bees from being able to access this entrance. You can see the robbing screen below, helping to protect the main entrance at the bottom.

After observing the ruckus for a few minutes, I realized it obviously was not a good time to do a hive check and add fresh gallon of sugar syrup! I was worried this robbing was going to intensify and possibly turn into a frenzy; so I referred to one of my favorite beekeeping blogs, Honey Bee Suite, and read her post on robbing. I decided to be extra cautious since this is a new colony, so I removed the feeder, and covered the boxes with a wet towels and sheet. Here’s what it look like covered: 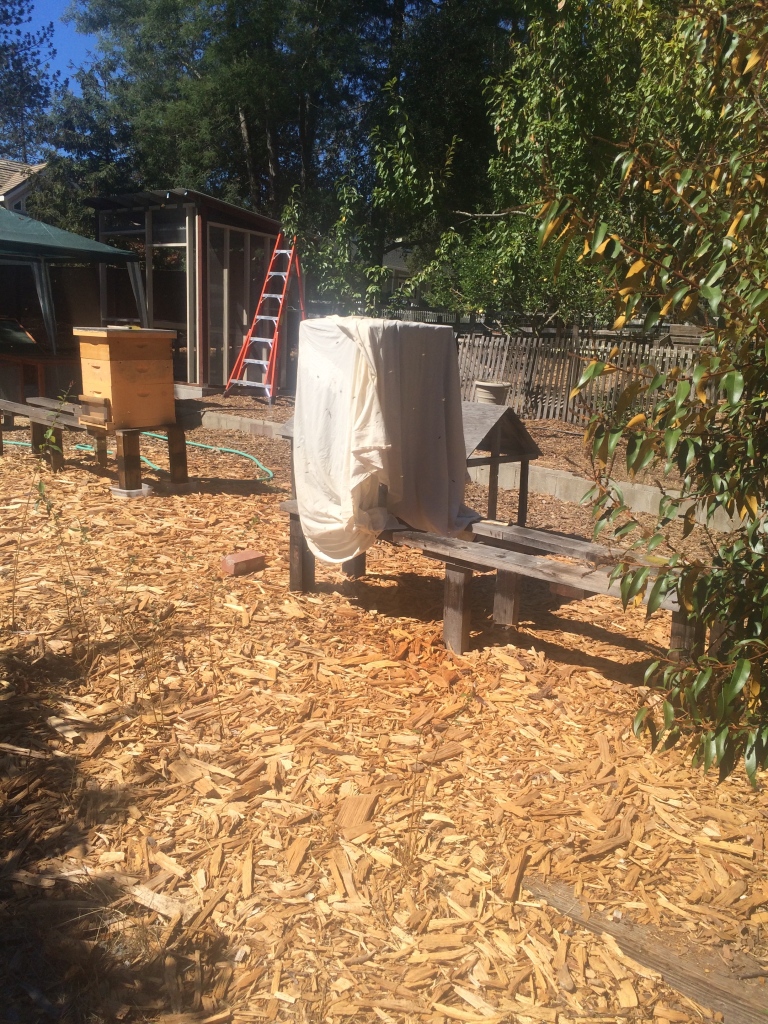 Thankfully, after a few hours, things settled down and I was able to uncover the hive and let any of the house bees who’d been “locked out” when I covered the hive go back in. Since that day, I attempted to add another feeder because this colony doesn’t have enough honey to make it through the winter. Unfortunately, that attracted yellow jackets this week and a few figured how to get inside the robbing screen…..not good! I removed the feeder again, and made sure the yellow jacket traps were refilled. Hopefully they’ll leave this colony alone and I can start feeding them again soon, I don’t want them to starve!

Speaking of yellow jackets, I observed my Cosmo colony attacking a yellow jacket that’d made it’s way into the inner cover of their colony. Check out these interesting pictures!

I was going to attempt a hive check for Cosmo colony last Saturday but when I opens the top cover, I saw this on the inner cover. AT first I wasn’t sure what was going on! I gently brushed a few bees away and underneath I saw the body of a yellow jacket. Here’s a couple pictures of the bees making sure this yellow jacket doesn’t go back and get more friends to help rob this colony. 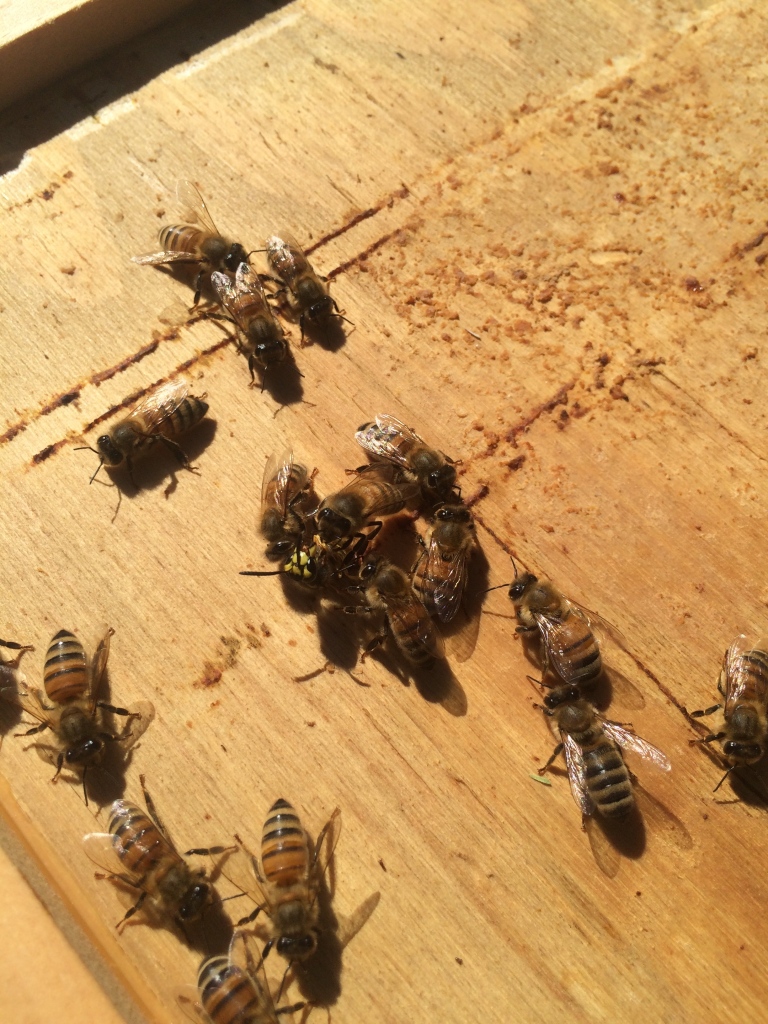 And finally, earlier this month, I caught my first swarm! It was a very tiny swarm that landed in my peach tree, it was maybe the size of a softball. I have no idea if they were from one of my colonies or somewhere else. This is a strange time of the year for a swarm because it’s very unlikely they will survive. I was able to capture them and put them into a nuc box I had from last year but a within a week they left. Here’s a quick video of me trying to get them into the box and a few explanations before you watch!

In the beginning, I’m spraying them with sugar water to keep them from flying away. This does not hurt them, they easily clean it off of each other.

Yes, that is Superman duct tape! The bottom board of a hive is a separate piece, in order to keep them from flying out of the bottom I taped it together for this process.

Climbing up a ladder with a moderately heavy wooden hive box is difficult!

Yes, I talked to them like they could understand me, saying “hi” and encouraging them to “go in” I was super nervous and I think it was a coping mechanism!

I know “gotten” wasn’t used in the correct context….again a bit nervous during the process 🙂

Big thank you to my husband for filming this on a day he was not feeling well and should have been resting!! Thankfully it only took a couple minutes!